Trying to understand this construct in Dbgv.sys driver for DbgView tool

I'm trying to reverse the Dbgv.sys (x86 kernel driver) for the DbgView tool. It has this sub_10D4A function that is called almost at the beginning of the driver's DriverEntry function. It goes as such: 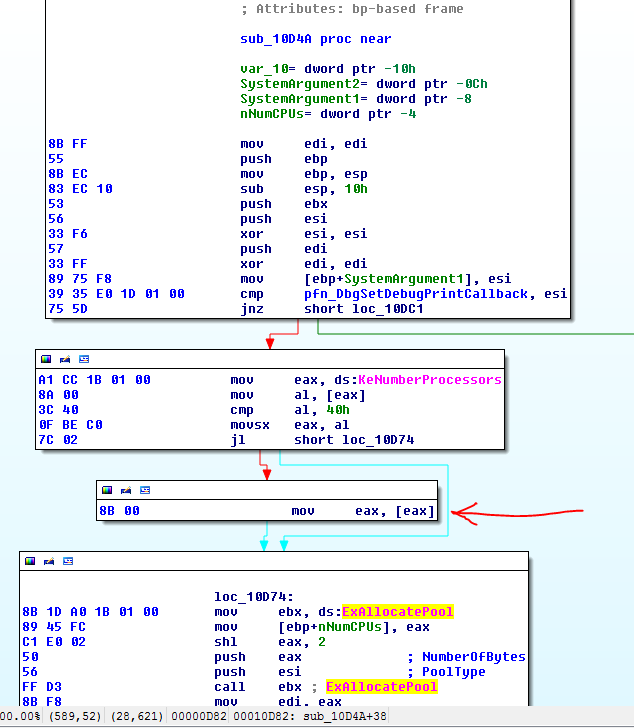 The relevant piece of disassembly:

What I don't understand is the construct that is pointed by the red arrow. If KeNumberProcessors global variable is larger than or equal to 64 CPU cores (or 40h) it will execute mov eax, [eax] instruction, which will try to read a DWORD from an address that is a number of CPUs, say 40h, which makes no sense.

Wouldn't it result in a BSOD? What's the intention there?

I still think this will create a BSOD, what's more I think that this is deliberate. It makes perfect sense to assume that this is deliberate once piecing all the puzzle pieces together. The source incompatibility will inevitably force that the developer notices the change of type for KeNumberProcessors from PCCHAR to CCHAR. The likeliest error is: error C2100: illegal indirection.

According to the PE header the file was created using WDK 7600.16385.1 (OS version), targeting XP (subsystem version), assuming we can trust best practices having been used to create the driver. However, the driver does run on Windows 2000 Professional (with SP4) as I verified. This is possible whenever the author is careful enough not to use functions unavailable on Windows 2000, but available at compile and link time for the nominal target.

Okay, so say you have an old driver targeting pre-XP Windows versions. You'll write this (some more code was necessary to force this code not to be optimized away):

and when targeting Windows XP using the WDK 7600.16385.1 we get an error during compilation:

... which we fix by removing the * that dereferences KeNumberProcessors, which then gives us a successful compilation and the following code:

that's identical. And there is no indication of anything like in the .sys for DebugView that would deliberately cause a BSOD.

So my money is on: this is meant to cause a BSOD, knowing full well that this situation could realistically never occur.

With the information I could dig up, I concur. This code would seem to lead to an inevitable BSOD.

Let's start by stating that the maximum available number of processors for Windows 2000 Server (Datacenter edition) was 32.

Based on the declaration for KeNumberProcessors, which is by the way deprecated in favor of KeQueryActiveProcessors:

that variable used to be a pointer prior to Windows XP. Looking at the above linked documentation you will find (relevant excerpts):

Now, while I certainly may not have all the answers that the folks from Sysinternals/Microsoft have by glancing at the Windows source code, my guess is the following. This was meant to be a clever trick - relying on circumstantial knowledge - to accommodate both Windows XP and newer (where the variable is a CCHAR) as well as prior Windows versions, where it's a PCCHAR.

Drivers that fail to use KeNumberProcessors correctly will get an "illegal indirection" error at compile time.

Problem seems to be that they seem to have gotten it wrong, if I am not all mistaken. There's, however, also a chance they got it right and I am lacking some vital information they have access to :)

You can test the scenario with MSVC by using:

Stepping through it gives you a clue as to what's going on. I have to admit the movsx throws me off here.

Here's how I think it may have been meant to work

Read the byte at the address specified by KeQueryActiveProcessors. See if it's a value smaller than 0x40 and if so, stick with the interpretation as byte.

If bigger than 0x40, which happens whenever the least significant byte of the (Little Endian) address contained in KeQueryActiveProcessors (i.e. on Windows prior to XP) is big enough, we may assume that this is in fact a pointer and dereference it.

I didn't check any other kernel version, though. Problem here is that we already have a value smaller than 0x40 among the lot.

By the way: having an address beyond 0x40 could reasonably be enforced by having the byte be a member of a struct that is page-aligned.

Now the part that would in any case destroy this scenario is the movsx (sign extend). It overwrites what could have been the address of the CCHAR unconditionally, thereby creating a bogus address that should for all practical purposes cause a BSOD.

Anyway, the mechanism behind this may have been meant to be something like with the resources IDs which can be 16-bit unsigned integers or pointers to zero-terminated strings with the resource name.

By definition, 32 bit systems cannot have more than 64 CPU cores (either virtual or physical). This is a hard limit on Microsoft's side for reasons unknown. One can assume those limitations are related to implementation details of the kernel such as the number of CPU core structures, etc.

Since this is a 32bit driver it'll only be allowed to run in a 32 bit windows version. Because of the limitation induced by Microsoft, drivers need not support more than 64 cores themselves, allowing / requiring a driver to handle these error conditions and unexpected situations to be using a BSOD.

If KeNumberProcessors global variable is larger than or equal to 64 CPU cores (or 40h) it will execute mov eax, [eax] instruction, which will try to read a DWORD from an address that is a number of CPUs, say 40h, which makes no sense.

Although your description is roughly accurate, there's another minor detail that makes this flow impossible you've neglected to note. Without it, this flow could've been functional.

That is the single assembly instruction just between the comparison and conditional jump: movsx eax, al. A move with sign extend from a al to eax. It makes sure EAX will not be a valid address to read from.

Yep seems like there'll be BSOD, but everybody is lucky to have KeNumberProcessors <= 0x40, so it never happens.

Not the answer you're looking for? Browse other questions tagged windows debugging kernel-mode kernel or ask your own question.