What are the available libraries to statically modify ELF executables?

I would like to be able to rewrite or reorganize an ELF binary program directly from the executable format (not at compile-time).

The only library I know to do this is elfesteem (used in Miasm). But, there must be others. So, what are the libraries or frameworks that you use to statically modify ELF executables ?

I just stumbled on this project ERESI. The project itself looks quite ambitious and supports mainly Intel and Sparc processors with some support for others. There are lots of tools as well that might come in handy. It does have one specific tool that sounds like if fits the bill exactly and quite a few others that are related:

Patchelf might come in handy for modifying the linker or rpaths specified in an elf:

Also there is this presentation about injectso which seems relevate to the topic static and dynamic patching of elf binaries. Admittedly the coverage on static binaries is limited but that is to be expected as it is more complex that just being a library interposer.

If you are looking for libraries specifically then the ERESI project does use alot of libraries so you could probably take Evarista as a guide and write something more in line with your goals with thier libraries.

libe2dbg : the embedded debugger library operating within the debuggee program.

libasm : the smart disassembling engine (x86, sparc, mips, arm) that gives both syntactic and semantic attributes to instructions and their operands.

librevm : the Runtime ERESI virtual machine, that contains the central runtime environment implementation of the framework.

libaspect : the aspect library brings its API to reflect code and data structures in the ERESI language.

libetrace : the ERESI tracer library, on which Etrace is based.

libkernsh : the Kernel shell library is the kernel accessibility library on which Kernsh is based.

I think your best bet will be to take a low level ELF library and write a small program to do what you want. I like the ELF Toolchain Project. I've found the tests and documentation that the team puts together to be pretty good. Regardless of what tool you end up using, you definitely want to read A Whirlwind Tutorial on Creating Really Teensy ELF Executables for Linux which discusses how to modify an ELF executable to be as small as possible (your purpose may be different but there are a lot of general lessons to be had).

E9Patch is different to other tools in that it can statically rewrite x86_64 Linux ELF binaries without modifying the set of jump targets. To do so, E9Patch uses a set of novel low-level binary rewriting techniques, such as instruction punning, padding and eviction that can insert or replace binary code without the need to move existing instructions. Since existing instructions are not moved, the set of jump targets remains unchanged, meaning that calls/jumps do not need to be corrected (including cross binary calls/jumps). 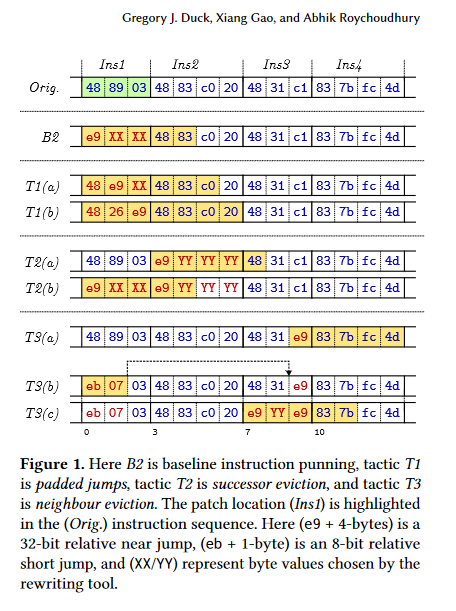 Not the answer you're looking for? Browse other questions tagged tools obfuscation deobfuscation elf or ask your own question.

3
Making changes in ELF file after dissassembly
8
Which python library for parsing Linux ELF files?
3
Replace section inside ELF file
0
Modify Strings in a ELF (Executable and Linking Format) that are stored in the .rodata

26
What symbol tables stay after a strip In ELF format?
2
possible to rebase an ELF file?
2
Can one modify a program by "wrapping" its binary? What tools exist?
0
Recognize the library functions of statically linked executable file in IDA Pro
3
Replace section inside ELF file
6
Writing ELF headers in Radare?
3
Best way to protect source code of .exe program running on Python?
0
Call libc functions from the payload statically injected into ELF binary