How is the IV generated from a timestamp based on this function?

Background: I am currently looking to make some diagnostic software interoperable with other software, but all communication that occurs in this software is encrypted with AES-128-CBC. A sample request is included below. The binary is also linked to at the bottom for those who wish to examine it.

I have worked out how the AES key is generated, and have been able decrypt the encrypted data, except for the first block, which obviously uses the IV during encryption. The IV is generated based on the timestamp, I have included a picture of the disassembled function below: 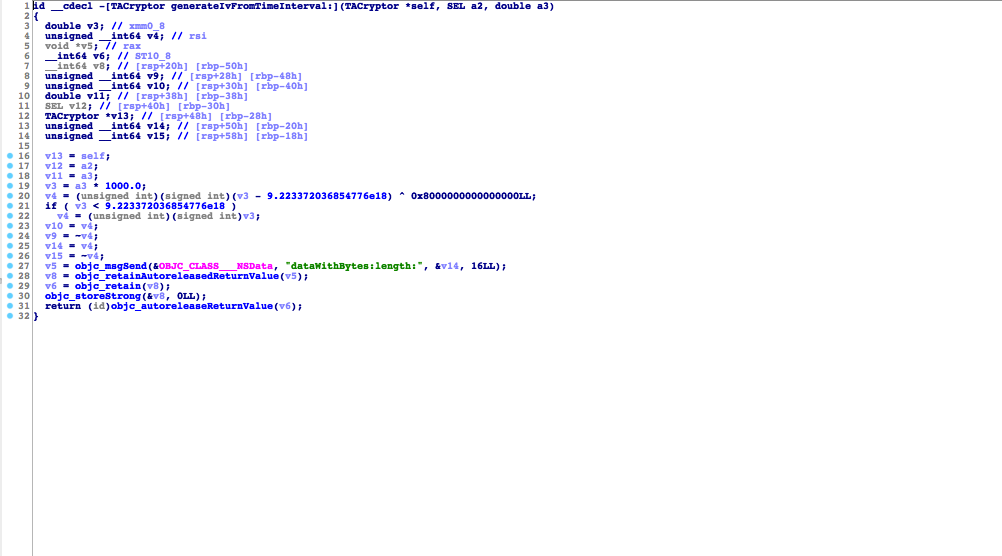 From what I can tell, the function is basically doing this (Objective C):

Where the data logged is the hex string for the given integer. This is further backed up with the fact that if I decrypt the base64 encoded data

where the correct output would be:

Link to the binary: https://www.dropbox.com/s/03mznlgsflkfn42/TA?dl=0

why is it that the first block is successfully partially decrypted even when the IV is not completely correct?"

You can understand this, if you have a look at the CBC decryption diagram. In this mode, the IV is xor to the decrypted first block.

So, if your IV is partially correct, then the decrypted plaintext will be partially correct also. Therefore the problem is that only the first half of your IV is correct. In case of the second half of the IV, you used the binary representation of the double value, while the first half is the timestamp after converting it to an integer value. Although I did not check, but I think you have to convert the timestamp to integer and perform a bitwise complement (~) operation to get the second half of the IV.

In AES CBC if you're encrypting the data, it's YOU who specify this IV, and usually it's just random bytes. So basically you don't care about how this Objective C code does this randomization, just use your own random data. IV is then stored within the encrypted data, at the very beginning.

At the decryption side, AES CBC gets IV from the encrypted data and just uses it.

So, unless you're doing academically correct reversing, you don't need to spend time on understanding how random data is generated in this particular case.

6
Why IDA Pro generated a "j_printf" function call?
3
What is the meaning of this code generated by IDA Pro?
4
How to deal with this "error" instructions generated by objdump?
1
Encryption (AES-128) in automatic meters reading
3
How to decrypt the config.bin from ZTE ZXV10 H201L
4
How can the problem posed for disassembly by the mixture of executable code and literal pools in ARM firmware be overcome?
2
How to extract information from a binary file knowing the target info
1
How to interpret this __ctype_b based predicate?