What does XREF mean?

I have been learning about the x86 assembly language by analyzing a binary using radare2 that is stored on a Intel 80386 machine. When I have been analyzing functions on the binary, I noticed that "XREF" is repeatedly called from various addresses in the file: 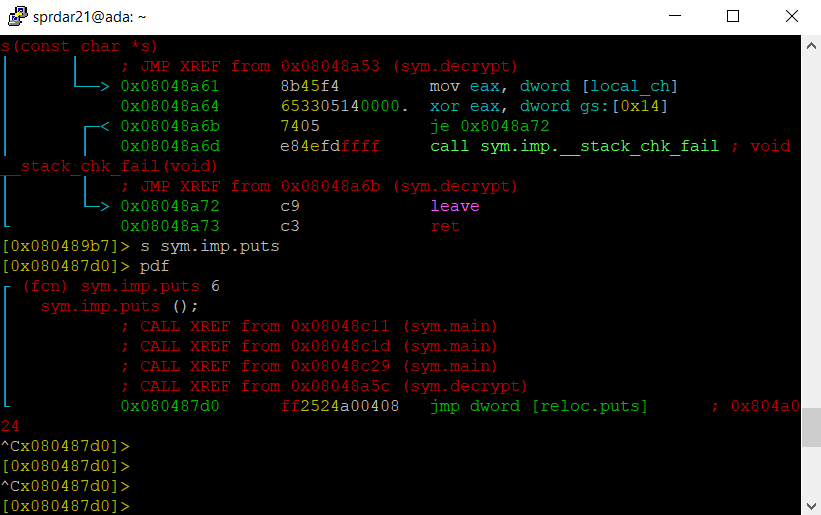 What does it mean? I've looked up "xref" all over the web and have been unable to find any definitive answer.

Cross References (or simply XREFs) is a feature of disassemblers to show you where certain functions and objects were called from or which functions and objects are used by a specific function. We can simplify it by relate to it as XREF-To and XREF-From. The referenced can be either Data or Code.

XREFs are a valuable resource when we want to figure out exactly where a function was called from or what functions the current function calls. This, as you understand, can be quite useful, so we don’t have to iterate the stack for frame pointers to look for the function that called the current function or alternatively searching by hand for a CALLs to specific addresses.

It means a cross-reference. It shows you that this part of code is called or referenced (like data) from another.

Not the answer you're looking for? Browse other questions tagged assembly x86 radare2 call intel or ask your own question.

6
What does %reg:value mean in ATT assembly?
7
Reverse engineering a VC++ video game
1
Detect specific algorithms running in a virtual machine via behavior analysis
0
What does byte_407030[ecx] mean?
2
Reverse Engineering BIOS (AMI A0.57)
5
Why do many imported functions jump to addresses that do not contain instructions?
0
What does ds mean?
1
What does 'test al, al' mean?
1
How to write these 4 example x86 assembly instructions in opcodes, according to the Intel docs?