I'd like to ask your help to understand the algorithm used to encrypt these hex/bin firmware (for an ARM-Cortex M4 microcontroller).

In the tar file above you can find different firmware versions. In particular, the V16 version has been released encrypted, plain and also an encrypted TE version (I don't know what does TE mean).

It has been a while since I started to analyze these files (I also asked another question here in the past) but, so far, I didn't find the solution. I tried to invert the bytes, swap the nibbles, xor but no luck.

As you can see, the encrypted version is 276 bytes longer than the plain. I expect that in those bytes are defined the header/footer and the key sections used by the bootloader to decrypt the binary before flashing.

Personally I think that a simple algorithm has been used (something like Salsa20 or ChaCha), nothing complicated (SHA, etc.). Thank you.

In fact, I doubt that they use Salsa20 on this firmware file... Let me just first explain what is my method to investigate such cases. For the rest, I will mainly use the binwalk tool.

First, the difference between the two versions of the firmware is not against the assumption of Salsa20, but the entropy is way too low to be a strong encryption as Salsa20. 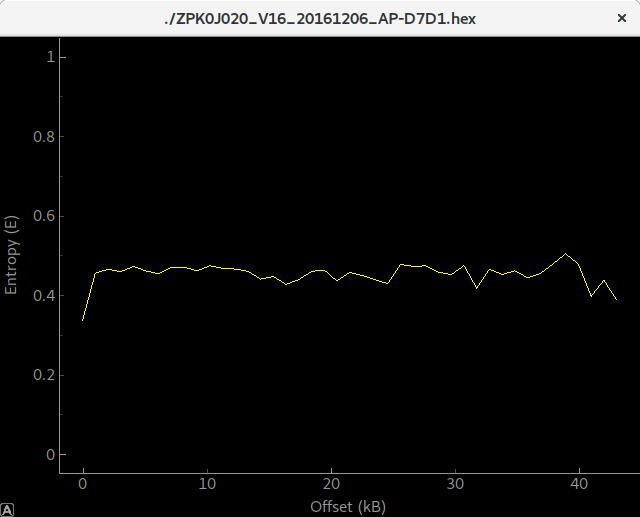 My conclusion is that the encryption of these firmware files is probably something weak. I would go for a xor-encryption or something similar. But, I did not investigate further as I think I disqualified Salsa20 and answered to your question. It is up to you to dig a bit now!

Not the answer you're looking for? Browse other questions tagged arm encryption binary or ask your own question.

23
What is the most efficient way to detect and to break xor encryption?

2
Steps for determining the hash algorithm used
1
Facing encryption
2
How to retrieve stored information, NAND filesystem with VB.Net
4
Reversing encryption by analysing executable
7
Is there a way to find out which hash standard by studying the source code?
4
How can the problem posed for disassembly by the mixture of executable code and literal pools in ARM firmware be overcome?
3
Finding the encryption key in a binary - IDA Pro and how an S-box might be represented in the binary