In practicing reading source code and analysing I've been looking at a program called aescrypt2_huawei which floats around the web and encrypts/decrypts the XML config file from Huawei routers like the HG8245 router installed by Internet Service Providers. The router is discussed on a number of blogs and the aescrypt2 can be downloaded and examined. I have also found the source code and put it on GitHub.

What I haven't found:

Running findcrypt in IDA Pro is also not turning up anything which leads me to believe my findcrypt plugin isn't working. However, I then start looking for the S-boxes sequence 0x63 0x7c which can easily be found in the source code and IDA pro doesn't find that either... I then dropped to hexdump and searched for 0x63 and it is not there. Given that I can see the S-box in the source and I just compiled the binary myself what am I doing wrong?

Shouldn't the forward S-box appear in the data segment more or less as-is?

And now that I've found the key through the debugger in the .bss segment why isn't the string in the data segment?

Initialization of the forward S-box

As you probably saw in the source-code, the forward S-box is present several times and initialized at two different places.

The first time that the forward S-box (Fsb) is declared is at the top of aes.c:

This array is then dynamically generated by aes_gen_tables() like this:

The other initialization of Fsb[256] is easy to spot in the code file and is a static constant which is defined like this:

Yes, the author of the program describes it in the comments:

Thus, if you want the array to be pre-determined, just uncomment #define FIXED_TABLES and you'll be fine. 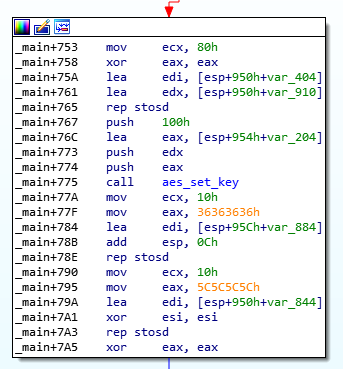 From there, locating aes_gen_tables() is easy peasy: 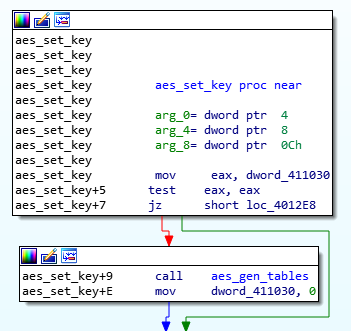 As we said, the array is dynamically filled with values and we can view it using the debugger. Let's find the address of the array to be initialized and put a Hardware Breakpoint on Write on this address.

Here's the part where the first item of the Fsb is initialized:

This is the equivalent part from the source code:

Now we all set and we can start the debug session. Press the play button and start the program, then you'll have to input information to the console that has just popped up. After done, pressing Enter in the console will trigger our HW breakpoint. This is where Fsb[0] is set to 0x63. Press the play button and the breakpoint again will be triggered, this time it's at the end of the generation loop and our array will be filled: 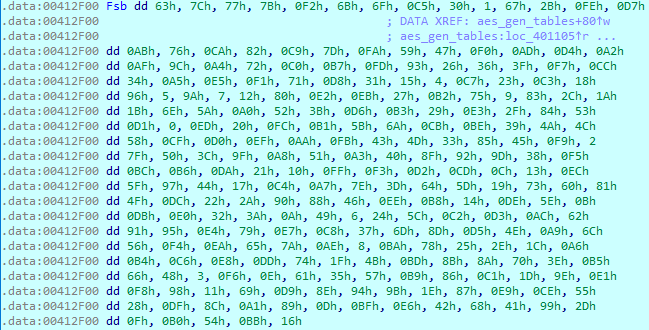 There we go, now we found our forward S-box after it was dynamically generated by the program.

Not the answer you're looking for? Browse other questions tagged ida encryption or ask your own question.

5
IDA PRO Structures Defining negative offset -4 -8 offset repair asm Hex-Rays
10
AirPlay Mirroring decryption (FairPlay)
2
How would I go about finding an encryption key or cipher by decompiling a program?
3
Help deciphering binary that creates 3 passwords
1
Which encryption/decryption algorithm is used in Synology Cloud Sync format 3.0 session key and data encryption?
2
Why does TOTP secret change every second?
3
How can I retrieve the encryption key in this code?