Working backwards from a popup

I'm currently trying to reverse engineer a game,but there's and anti-debug, so far the only leads I've tried to follow are: I found an IsDebuggerPresent API, I tried to change the value of EAX by putting in a hardware breakpoint (write) at the address of the API, then running the debugger and opening general registers and changing EAX it to 0x00000000, but that didn't accomplish anything.

that way I can start working backwards from the origin and find out where it comes from.

The error you've received was probably thrown by either Themida or WinLicense, a well known protectors. I'd say here that fully bypass of both Themida and WinLicense are goals that are hard to reach for an inexperienced reverse engineer.

Because it's the 3rd question you ask about this subject, and it seems like you are truly struggle with it, I'll show you a quick step-by-step tutorial of how to bypass IsDebuggerPresent on runtime, from inside IDA and avoid the pop-up message.

First, let's create a small program which all it does will be to check whether it was executed inside a debugger or not:

As you can see, the program only contains a main() function which will print "Debugger found" or "Debugger not found", depends on the result of IsDebuggerPresent().

Let's compile the program. I used TinyCC because it is less noisy than some of the other compilers. Basically you can use whatever C compiler for windows you wish.

Now that we have an executable .exe file, let's execute it:

As expected, we ended up with "Debugger not found" printed to the console. Let's open the executable in IDA Pro. As you can see, the main function looks something like this (click on it to enlarge): 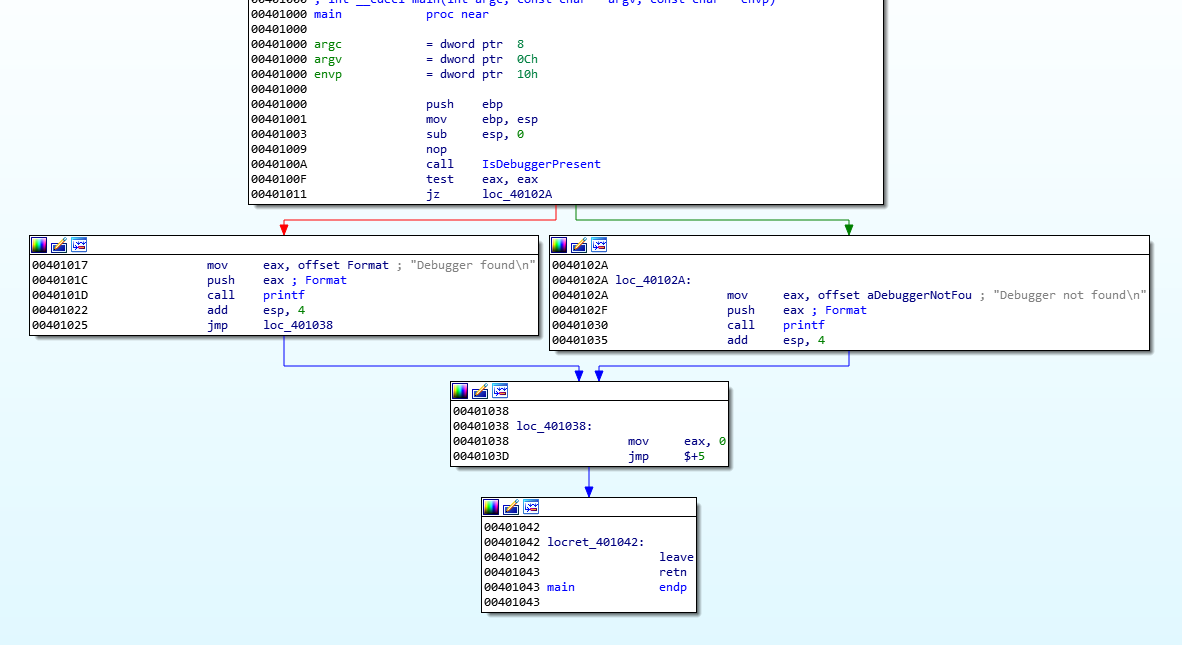 Let's execute it. You may want to put a breakpoint before the program exits but not before the message is printed.

We can see that "Debugger found" was printed to the console.

Execute the program inside IDA. The program has stopped at our breakpoint on test eax, eax and we can see in the registers panel that eax has non-zero value (in my case eax==1).

Let's right click on eax and choose "Zero value", and immediately the value of eax will changed to zero.

Now let's continue the execution (don't forget the breakpoint before exit() in case you removed it for some reason). And as we wanted, the message "Debugger not found" is printed in the console.

Hope you understood how to bypass IsDebuggerPresent by modifying the value of eax, now you can continue your reverse-engineering process.

2
How to prevent application from killing OllyDbg
1
Finding memory breakpoints from debugged executable
1
Working with unsupported binary formats
2
Why does program fail to run under several debuggers?
4
Automating pattern-based de-obfuscation of x64 code using IDA plugins
2
How do I reset the "don't ask me again" checkbox in an IDA popup?
2
Debug program using peculiar anti-debugging technique