What causes the need for NOP sleds?

So when taking a simple scenario and exploiting a stack buffer overflow in which I can execute code on the stack, my payload simply is:

What I get is that we need to have a memory address included in the shellcode which points somewhere into the NOP Sled, which we need because we "can't be sure" what the return address is.

Why can't we be sure?

Could it be simple things such as argv[0] being different, eg. on one system the file might be "/vuln" and on another "/home/user/vuln" and for this reason the stack is already different? Do environment Variables play a role? What else is involved?

Basically my question is: Which factors lead to the stack being different every time we execute / executing the vuln program on another machine?

On modern systems the most obvious culprit is probably address space layout randomization, but stack frame layout variablity was problematic for exploit development even before ASLR became widely implemented. This was alluded to in AlephOne's venerable "Smashing the Stack for Fun and Profit":

So this is an issue even without ASLR enabled. Reasons for this involve the following (as far as I know):

Interestingly, the code that manages the runtime stack is generated by the compiler and the compiler cannot know what the absolute positions of stack frames during program runtime will be:

While the location of a stack frame cannot be predicted at compile time (the compiler cannot in general tell what other frames may already be on the stack), the offsets of objects within a frame usually can be statically determined. Moreover, the compiler can arrange (in the calling sequence or prologue) for a particular register, known as the frame pointer to always point to a known location within the frame of the current subroutine. Code that needs to access a local variable within the current frame, or an argument near the top of the calling frame, can do so by adding a predetermined offset to the value in the frame pointer.1

The way in which memory is allocated and deallocated for stack frames can vary across compilers, as well as different versions of the same compiler toolchain. Why this might be the case is alluded to in the System V i386 Architecture Processor Supplement (page 36):

Here is how all of this ties together:

In sum, the offset between the buffer being overflowed and the target return address location can vary based on compiler toolchain (GCC, TCC, MSVC, etc), compiler version (3.x, 4.x etc) and the particular options used to compile the binary (alignment value, optimization level, stack protection, etc):

It has been suggested elsewhere that stack layout indeterminicy can be caused by environmental variables and program arguments:

Exploit development can lead to serious headaches if you don't adequately account for factors that introduce non-determinism into the debugging process. In particular, the stack addresses in the debugger may not match the addresses during normal execution. This artifact occurs because the operating system loader places both environment variables and program arguments before the beginning of the stack

This makes sense if we look at how the stack is laid out in virtual memory: 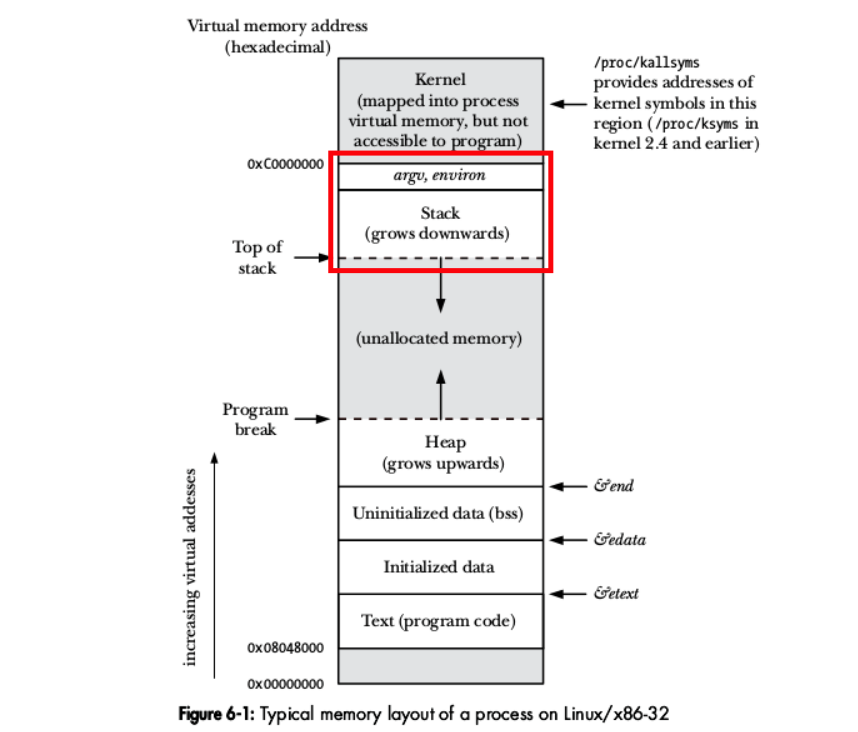 If there are differences across executions in the environment or arguments, the location of the base of the stack may change as well.

To show that this is not simply idle speculation, we can look at a concrete example. First, we disable ASLR like so:

Then we write a quick program in C:

When compiled and then run a few times with steadily increasing argument lengths, it is observed that the position on the stack of one of the local variables changes to lower and lower in virtual memory:

This indicates that changing the sizes of the arguments passed to execve also changes the position of the runtime stack in virtual memory. The weakness of this extremely trivial example is that it does not accurately reflect the complexity of real-world programs or capture how the runtime stack changes throughout execution of more complex processes.

An additional variable influencing the layout of the runtime stack is whether the binary is dynamically linked or not. If it is dynamically linked, process startup is handled by glibc. On x86 Linux systems the C runtime library function call sequence looks similar to this: 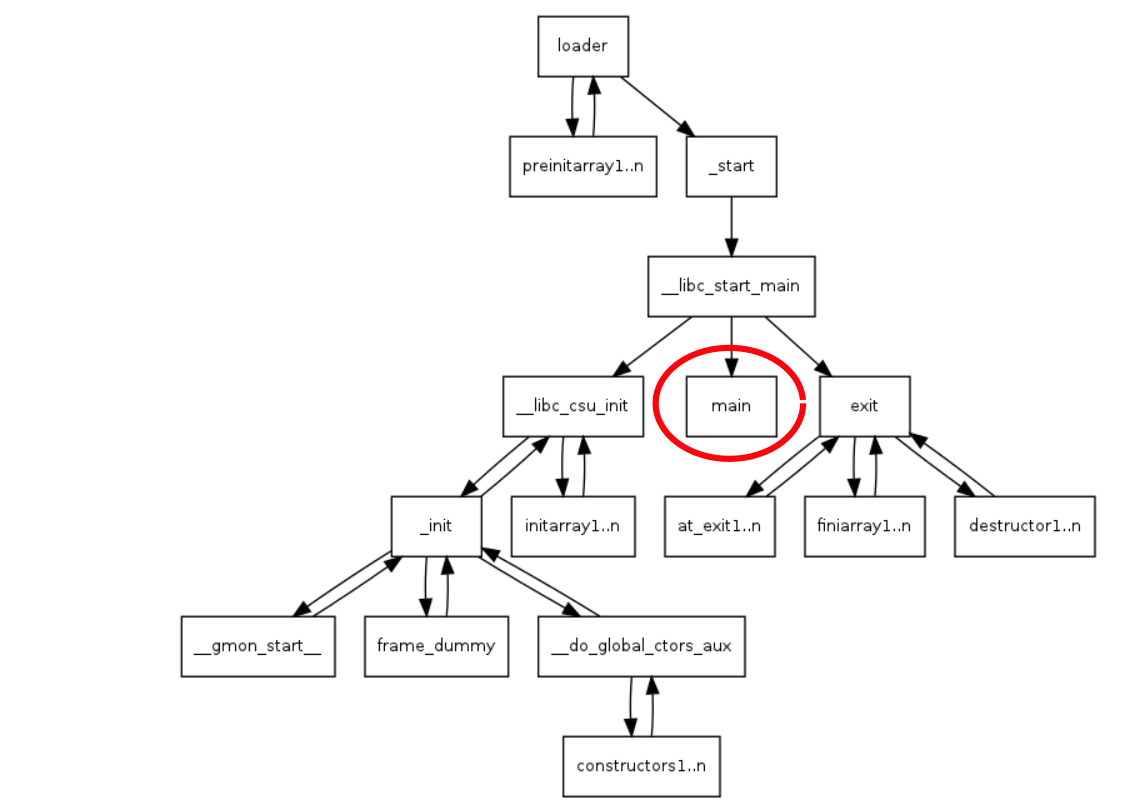 This will depend on what version of glibc the binary is linked against, and the runtime environment will vary across machines. This means that the function call sequence during process startup will vary across systems as well.

As you mentioned, many things can leave you with a different memory layout than the one you expect:

Using hardcoded addresses pointing to the stack as the address that will be taken by EIP is the wrong approach. That's how it was done in the early days. Sketchy approach and no DEP/NX in place.

A more stable approach is that instead of jumping to the middle of the stack, you can directly jump to code that will get executed. There are different techniques to do so such as return-to-libc/library or ROP.

Another simpler approach is checking where your registers point in the moment when the overflow happens (actually, when the segfault is triggered). Imagine that ESP points to 0x12345678. If you have control of the contents of 0x12345678 at the moment of the segfault in a stable way, you can just use the address of a JMP ESP-kind instruction as what will be taken by EIP.

Because you are certain that the binary itself or the libraries that get loaded (therefore, their instructions) when the binary is executed will always be stored in the same address. (1)

Long story short, the motto goes by... "If your exploit contains NOPs, you are doing something wrong!".

To answer the question in your title, there is no need for NOP sleds.

Not the answer you're looking for? Browse other questions tagged memory buffer-overflow security or ask your own question.

7
buffer overflow exploits - Why is the shellcode put before the return address
1
The Addressing Problem?
1
Access violation error only when stepping after breakpoint in Immunity
1
Buffer overflow on server
2
Why SUID Shellcode not working but Basic Shellcode working?
2
Why do we need to know the address of shellcode?
3
How to execute a specific shellcode with a non executable stack without using format string? (without ASLR and stack cookie)
3
Illegal instruction error in simple buffer overflow