Checksum in CAN message

I'm trying to fake a CAN message, but I'm not able to understand how the 8-bit checksum is calculated. The checksum follows a pattern along with a 4-bit rolling counter. As long as the data of the message is static, the pattern is repeating every 16 messages. The mean value of the checksum of 16 messages is 127.5. That is more or less what I have been able to figure out.

Can you make any sense of it / see how the checksum is calculated?

Here is the data:

That's not a typical checksum at all. You can tell by it's great distance between 1bit changes. It's a CRC. And unless it's a special polynomial you aren't providing all of the data per message (I checked some common polynomials and none matched).

So either you're omitting data and it's a standard poly, or you're going to have a write a 8bit and 16bit CRC and try all polynomials, see if you get any hits.

As to the mean being 128 or so... I'd start looking at 8bit CRC and trying polynomials out to 16bits. You'll get a hit soon, but fwiw, I'd check the inverse of the results in case someone thought they were being cute.

Also see SAEJ1850 vs SAEJ1850"ZERO" for changing the IV before starting the CRC.

It looks like this is a custom CRC in which the initial value of the algorithm depends on the first byte of the message.

These parameters stay consistent for all messages:

But the initial value depends on the first byte:

You also have to replace the last byte with 0x00.

For example, using the second message:

Replace the last byte with 0x00:

Using an online calculator and the parameters from above: 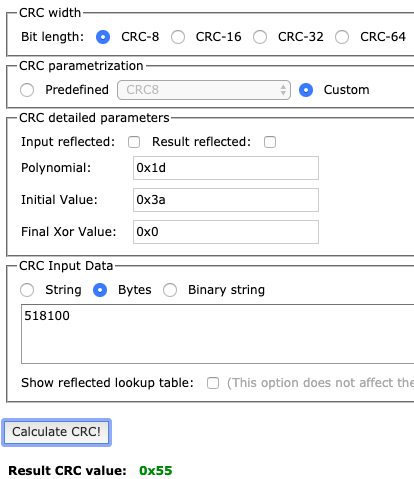 I have also tried finding some sort of relationship between the first byte and the initial value used in the algo, but didn't come up with anything.

Not the answer you're looking for? Browse other questions tagged encryption decryption crc or ask your own question.