I was reversing some executable and came across to this code: 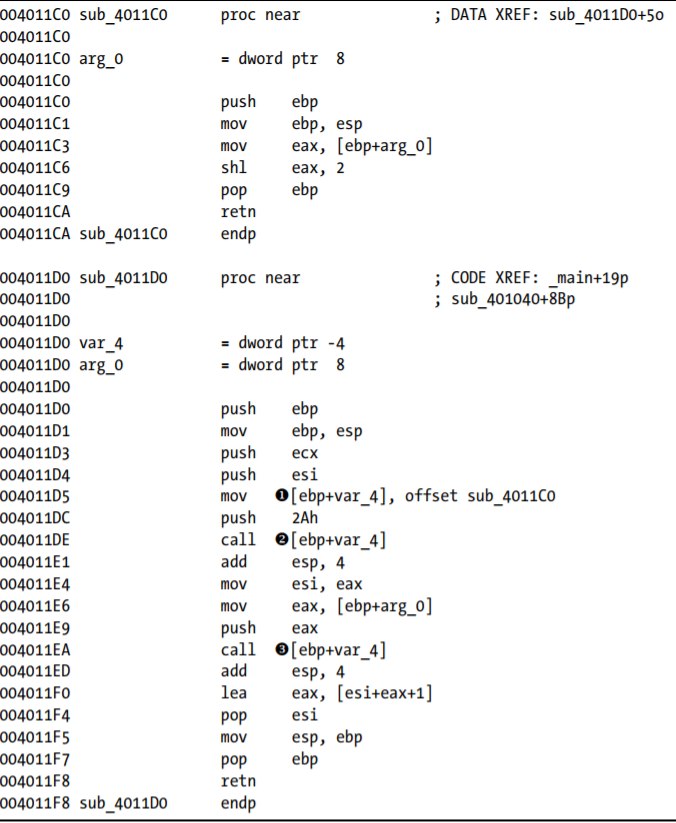 As I found out later, it's using function pointer to call function sub_4011C0 and that could be the reason.

My question is why does dissambler show this kind of output? why doesn't it recognize the function pointer and call the function twice? thanks.

In assembly there is only one explicit reference to the target function, and that's where its address is moved to the variable at point 1 (you can see that the reference is marked 'o' (offset) and not 'p' ([procedure] call)). While IDA could in theory track stack var assignments and add xrefs also at the points the variable is used for an indirect call (2 and 3), this:

So it's better to add only explicit cross-references and let the human decide if extra ones need to be added manually.

That said, IDA does some limited amount of register tracking to handle the most common situations, e.g.:

You can see that it added a comment at the call esi instruction with the actual destination loaded earlier into esi. (it also adds a call xref in such case).

Not the answer you're looking for? Browse other questions tagged ida disassembly assembly c++ c or ask your own question.

1
What is the difference between these two function prologue instruction sequences?
4
Different disassembly for the same function?
3
What's the purpose of arithmetic shifts by zero bits?
1
Question about IDA 6.8, also why its creating unnecessary vars
0
Why doesn't alloca_probe follow x64 calling convention?
0
how to use class member function defined in a exe within a dll
0
Can't find references (xref) to function