How to monitor specific variables in a running process?

I would like to monitor, record, specific variables in an application but I am not sure what is the right way to approach this problem.

The application is a mix of C(5%) and C++(95%) and it is relatively big, around 5 million lines of code. The target OS is CentOS 7 and my application is always compiled with debugging flags (-g3 -ggdb) and I can add/remove flags if necessary to achieve what I am looking for. In the ideal scenario I don't want to instrument the code in the main application, mainly due to the size of the app, and/or add any overhead to my application.

I have not started implementing anything yet but I have two different approaches:

I am still not sure about how I can handle different data types, maybe I can somehow infer the data type by parsing the main program but I am now sure.

I understand that the OS won't let me easily access the memory of another process, but there should be a trick. What is that trick? Is there a more straight forward way of doing this? What is the overhead associated with this? Is there a way to also write into a variable?

The second approach is more interesting because everything is in its address space, so no trick is requuired. How ever I still have to know the type of the variable.

I am sure others have had similar problems but I don't know what this process is called. What should I search for to get more information? I understand this is a very general question, any pointers are highly appreciated.

well if you can use a debugger then you can employ a variety of monitoring techniques.
The example below is for a windows app being debugged by windbg.

calc is windows calculator it can work in the following radix hex, dec, oct and bin

it stores the radix in a global variable named g_nRadix

the txt file that contains the debugger commands (aka script file)

and when ever i change the radix in the gui 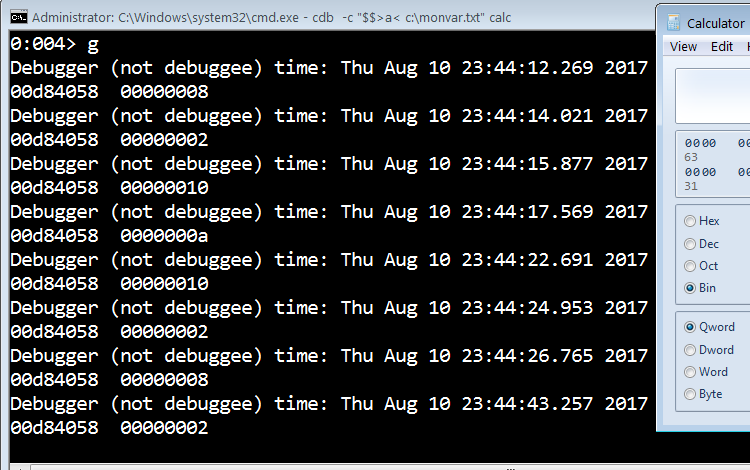 What you are looking for is called value profiling. It's a technique that aims at logging the values of certain variables (like loop bounds) in order to extract all possible values and use them to fine tune the code for better performance.

One thing you should know, once you compile your code, debug info or not, there's no more notion of variable. And, if you use a compiler optimization flag, and you should, variables will be optimized out.

This said, your best option is either to go through your code and put prints manually (even through a parsing script); or you can go with a compiler plug-in.

If you are using GCC, I would recommend writing a plug-in guided by your own directive i.e. #pragma watch var which then instructs the compiler to instrument at the GIMPLE level with a function from a library - let's call it watch_var.so. This library's functions look like the following prototype : dump_int_var_value(FILE *fd, char *var_name, int var_value).

Only at the compiler level can you cleanly automate this process given that you'll know when the variable is declared, when it is used (read & written), and its type. The pragma directive mentioned above can come in two flavors :

1) Placed before variable declaration, var1 & var2 will be watched.

From here, I guess you get the idea.

From where I stand, I see this as the only clean solution to handling variables without having to re-invent the wheel or delve into complicated tricks.

Not the answer you're looking for? Browse other questions tagged binary-analysis c++ memory or ask your own question.

9
What does this memory pattern pointing from the thread-local storage mean?
6
Can a Windows process check if it has been injected by another process?
0
Detour null function
2
PE file format: How can I find the heap memory space in a running WinNT program?
4
getting the static address/offset of a variable
3
How can I find my variables in the running process?
1
Is it possible to hijack a C++ DLL after it has been loaded into the memory space? How?
0
How to identify/extract relevant assembly from a binary?
2
gdb shows that EBP contains a value other than some address(which is what it is supposed to contain). How is this possible?
2
Arrangement of variables on the stack - out of order?