Help reading a variable from an address in an executable?

** Edit ** After some great help from @tylernygaard I have discovered that the same variable is being written to two difference places in the memory. They are both 'static' addresses. Problem solved. Original question below....

I simply wanted to "read" a Total variable from an executable whilst it was running.

I was recommended a program called Cheat Engine which I have downloaded, completed the tutorial and then used.

These addresses are so close that I'm assuming this isn't just dynamically chosen at runtime (is it?). So I wondered if anyone knew why they would be different?

And whether it would still be possible to write some code to read the correct value?

You will know if they are static addresses if Cheat Engine shows them green on the search results screen. See pic related. 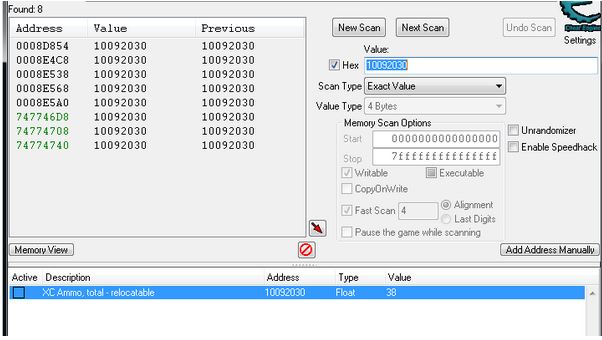 Not the answer you're looking for? Browse other questions tagged exe or ask your own question.

2
Is it possible to extract / read a variable out of a running .exe file?

2
Is it possible to extract / read a variable out of a running .exe file?
0
(ILSpy) System.BadImageFormatException: Format of the executable (.exe) or library (.dll) is invalid
1
How to create executable (create build) from original decompiled exe?
0
How to extract machine code from a file(especially executable) in C
0
FINDING & EXECUTING a function from an exe/dll (not compiled by me)?