I've been looking for an open-source GUI tool to extract PDF's in an automated way on Windows systems. I've used Didier Steven's tools with great interest for a while, but cannot make sense of how to use his PDF decomposing/analyzing tools, even after watching some of his videos. They seem to require significant understanding of the underlying PDF construction, and possibly much more.

For SWF files, the tool SWFScan is the kind I'm looking for: you load the file in question into the tool. From there, you can explore the links, scripts, and images. It even auto-analyses code and shows which parts may have security issues and what the issue is for each one, then gives a webpage reference with more information.

Does anyone know of a good open-source GUI for Windows that can load a PDF and not execute it but extract all the scripts, compiled code, text, links, images, etc.? Ideally, it would show the relation of each, like when you click on a certain image, it would tell you what script(s) are run, which URL it goes to, and let you see the image on its own.

PDF's are so common, next to SWF, that this kind of tool seems like it would already be common. I may have overlooked it/them.

Sogeti's Origami framework comes with a GTK based GUI.

origami is a Ruby framework designed to parse, analyze, and forge PDF documents. This is NOT a PDF rendering library. It aims at providing a scripting tool to generate and analyze malicious PDF files. As well, it can be used to create on-the-fly customized PDFs, or to inject (evil) code into already existing documents. 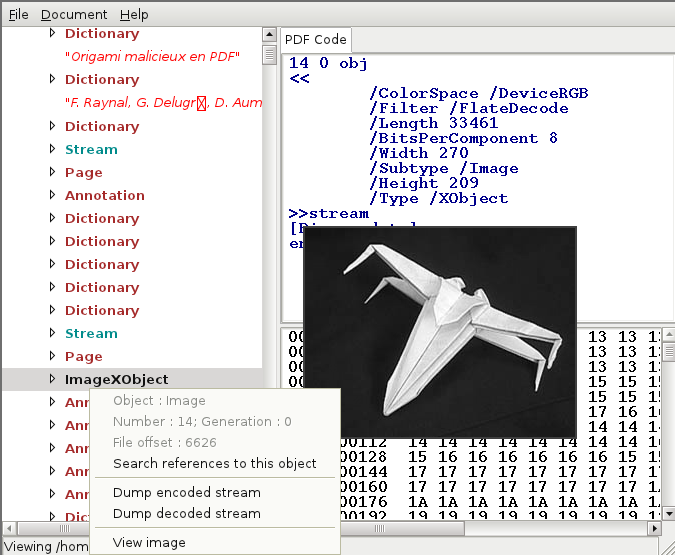 Here is how I installed it on my Windows 7 system:

If this doesn't work for you, I'd suggest trying the above steps from Cygwin, where you can essentially follow instructions for installing on *nix.

If you're installing it on Ubuntu/Debian

Install ruby with the following command:

Afterwards install origami as listed above:

If you want to use the GUI you will probably need to install libgtk2.0-dev and get the rake gem installed for you to be able to install gtk2:

Since pdfwalker also needs libcanberra, it's a good idea to install it now:

Afterwards install pdfwalker, since it was moved to a separate gem:

And it should run from the commandline as described above.

Jsunpack - online toolkit for analysis of files, that may contain packed\encoded JavaScript code, like PDF\HTML\JS. also work with .pcap files

In addition - offline tool for linux (well, not GUI, but good tool) to extract shellcodes and hidden fields:

Pdfextract - An offline command-line tool and library that can extract various areas of text from a PDF.

Perhaps PdfStreamDumper is close enough to what you want, but you're still going to need some knowledge of PDF to use it effectively.

The Cerbero Profiler is a tool designed primarily for malware and forensic analysis. It supports a huge number of file formats (listed below) on which it performs analysis and lets the user inspect their internal layout. The Profiler is often used to identify 0-day threats and personal information inside of files. However, given of the scale of the project, it has many other uses and we encourage you to visit our blog in order to see the Profiler in action.

You might also want to check out my open source file-dissect tool. I wrote a PDF parser for it, but haven't committed it yet. Sorry, I know that doesn't help much. I will eventually push it up though.

While there is no GUI, I believe it's worth mentioning command lines tools that will help with the in an automated way part of your question. I've personally used the mupdf associated command line tool: mutool.

For example working on the following PDF file, here is what you would do to extract the encapsulated JPX stream:

So you simply need to:

For PDF/A-3: EmbeddedFile (as in this file) you can even run:

Not the answer you're looking for? Browse other questions tagged decompilation tools windows or ask your own question.

15
Are there any open source test suites for testing how well a disassembler performs?
21
What tools exist for excavating data structures from flat binary files?
1
VADs with RWX permission in winlogon.exe process
7
GUI for transforming Java Bytecode based on decompiled source?
2
What are the open source symbolic execution tools for windows binaries
0
2 Stage Shellcode Embedded in Doc file [Out Of Memory - Can't extract it]
4
Need help identifying main processor for Roland synthesizer
0
Automatically detecting and carving images from .doc, .docx and spreadsheets