I do not understand the following:

When I use gdb to disassemble it, I obtain:

I really do not understand why the stack pointer is decremented by 0x88.

I believed that it would be 0x64 instead of 0x88. Can you explain it please?

Thank you very much!

There are several factors involved in how much space is allocated by the compiler for a function's stack frame on the process runtime stack:

The specification for the stack frame on x86 machines is given in Chapter 3: "Low-Level System Information" in the System V Application Binary Interface Intel386 Architecture Processor Supplement, Fourth Edition in the section titled "Function Calling Sequence".

The "unspecified" area in a stack frame is the space created for local variables and where arguments to the function are copied to. This space is managed by the compiler.

Here is a diagram from the ABI:

It is the compiler that manages stack frames, and in order for a stack frame to be aligned the alignment of variables within the stack frame must also be known.

Alignment of variables depends on their type and the architecture of the CPU. This is also specified in the ABI: 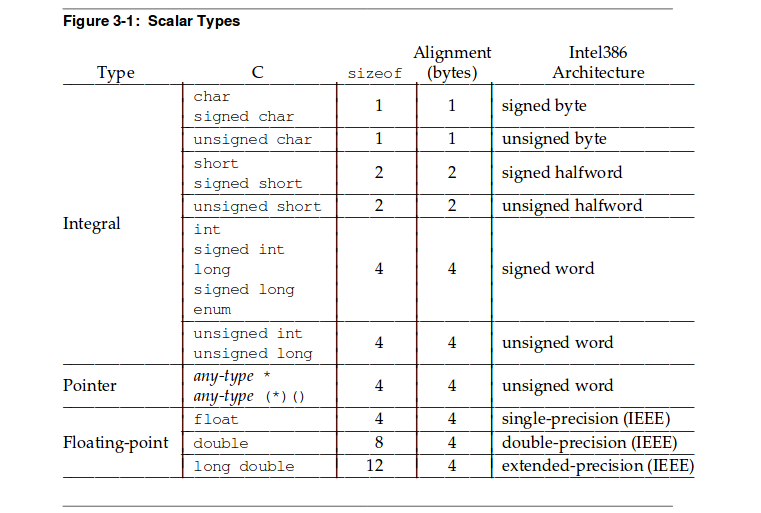 There are conventions that pertain specifically to the alignment of arrays, structures and unions:

Aggregates (structures and arrays) and unions assume the alignment of their most strictly aligned component. The size of any object, including aggregates and unions, is always a multiple of the object’s alignment. An array uses the same alignment as its elements. Structure and union objects can require padding to meet size and alignment constraints. The contents of any padding is undefined.

However, on i386 architecture systems, GCC aligns the stack to a 16-byte boundary by default:

The stack frame for vulnerable_function()

Assembly code generated by gcc + as:

Here we see that 16 bytes of space were allocated for a 4-byte pointer.

A function called char_array_test with a char array local variable:

Assembly code generated by gcc + as:

Here we see that 120 bytes of space were allocated for a 100-byte array.

In the case of void vulnerable_function(char *string), space in the stack frame must be allocated by gcc for a 4-byte pointer and a 100-byte array.

Compiler Explorer is an interactive compiler that runs in your browser. Playing around with it is much faster than constantly recompiling code and disassembling it.

Poke-a-hole and friends is an article that discusses how structures are padded in order to maintain alignment and how this changes across architectures.

what is “stack alignment”?

As SYS_V correctly cites in his answer, the GCC documentation states that GCC will work to align the stack pointer to 16-byte boundaries by default.

Attempt to keep the stack boundary aligned to a 2 raised to num byte boundary. If -mpreferred-stack-boundary is not specified, the default is 4 (16 bytes or 128 bits).

We find some reasoning as to why this is done as well (NB: On the 64-bit architecture, 16-byte alignment is mandatory):

[A different value] leads to wrong code when functions compiled with 16 byte stack alignment (such as functions from a standard library) are called with misaligned stack. In this case, SSE instructions may lead to misaligned memory access traps [and] variable arguments are handled incorrectly for 16 byte aligned objects [...] You must build all modules [with the same value]. This includes the system libraries and startup modules.

Note, however, that this is mostly about the stack frame (boundary), not necessarily the individual objects on the stack. This frame alignment happens not inside the function, but at the call site where you will see something like this (note the extra subtraction from %esp):

Nevertheless it makes sense to keep (some) objects aligned as well.

In your example, you encounter 0x88 (=136) bytes allocated for the 100-byte buffer while SYS_V got 0x78 (=120) for the same. Note that both these values are congruent 8 modulo 16. This is chosen because at this point, your stack frame already includes two 4-byte values: the return address and the saved frame pointer. With these combined, you end up 16-byte-aligned after the allocation.

0
What additional data does a compiler populate the buffer space with?
10
What is the purpose of these instructions before the main preamble?
0
x86 main preamble makes stack aligned on 32-bytes boundaries

6
Question about LEA instruction
0
MSVC Generates Weird Code for Volatile Local Variable
1
Basic clarifications about .hex and .bin file
4
Question about the limit and base address in x86-64 segmentation model?
2
Reversing PE32 executable - CTF Question
2
Finding the correct input of an executable to print out the flag. IDA 7
0
A question about moving data with LEA and MOV