Following the question here (3 questions on assembly - syntax, meaning, and equivalent in high level code (eg C++)), I would like to know for the same x86 code in AT&T syntax:

This is not a homework question - I am new to assembly. Example code is not from actual code - it's to help me get a better understanding & illustrate my questions.

What are some Linux commands (that come with distros) that decompile assembly code?

There are none. You can see this for yourself if you look at the functionality provided by tools in the GNU binutils collection.

And here is a different diagram of a portion of a process runtime stack (from CSAPP chapter 3 "Machine-Level Representation of Programs": 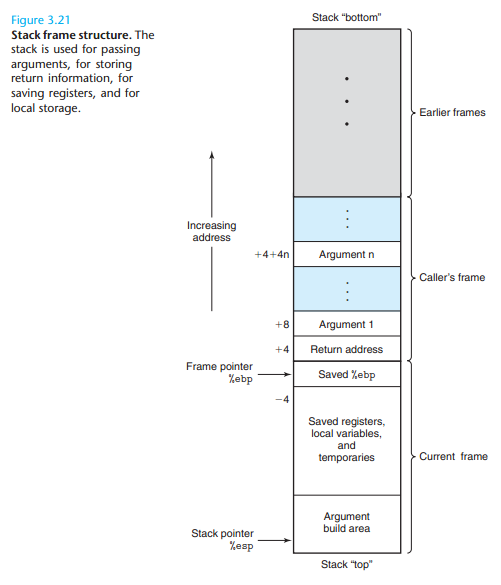 The runtime stack is a region high in a process's virtual memory. For reference, here is a diagram of virtual memory (from TLPI, chapter 6 "Processes"): 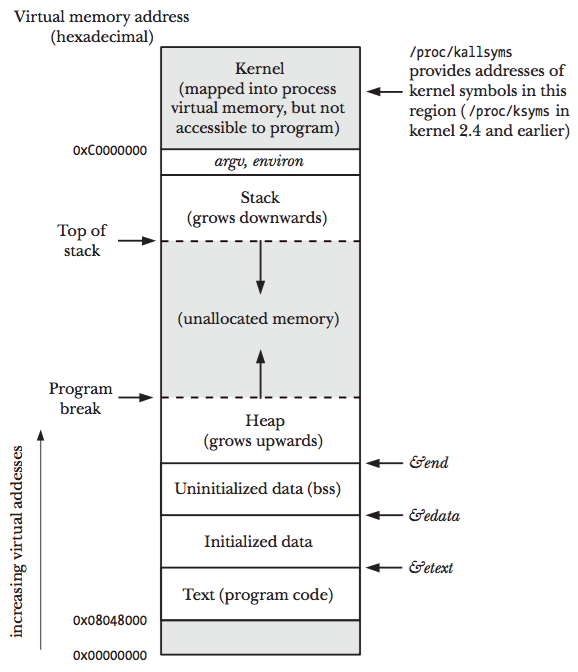 Now to your question:

What are the implications of the last two lines of code (decrementing stack pointer and base pointer)?

The code that you have provided is not from a called function, so no stack frame would be created for this code. In other words, no function calls means no stack frame creation. This code would be mapped from an executable ELF binary's .text section to the text segment in virtual memory when executed and its process image is created. This means that in the context of the code you have provided, the statements dec %sp and dec %bp are of no consequence since there are no function calls and no stack frames to be managed.

What are the lines of code doing from a higher level perpective? - Eg "Takes an input and outputs a string"

The best thing you could do for yourself is learn how to create some basic functional assembly code and step through the code with a debugger like gdb using the stepi and info registers commands. This will allow you to see for yourself what happens as a result of each statement. It will also speed up the learning process and deepen your understanding of assembly and virtual memory.

Not the answer you're looking for? Browse other questions tagged assembly decompilation linux binary or ask your own question.