Am I interpreting the instructions correctly or not. (ollydbg + executable)

I'm fairly new in reverse engineering, but I do comprehend assembly code. However, I'm facing a problem.

It is about an old Rockstar game, "Bully: The scholarship edition" (released 2007 - aka "Canis Canem Edit"). It however has issues to perform on Windows 10 anniversary edition OS that I have at this moment. That is expected since it's an old software. To resolve that, I tried many online solutions (compat mode, setting CPU affinity, ect), which didn't helped much.

So I decided to look into the code by using OllyDbg. The cause of the crash is pretty constant; an access violation. However, it is purely random. I am able to play a hour without problems, or experiencing a crash within 10 minutes. The program apparently tries to move data from address 0 to a register, which isn't allowed. The exception is always thrown at the same place, where the pointer call occurs.

Here is a screenshot from OllyDbg when debugging the program. (Sorry for small resolution, it's an old game, hence the resolution is set at 1280x960) 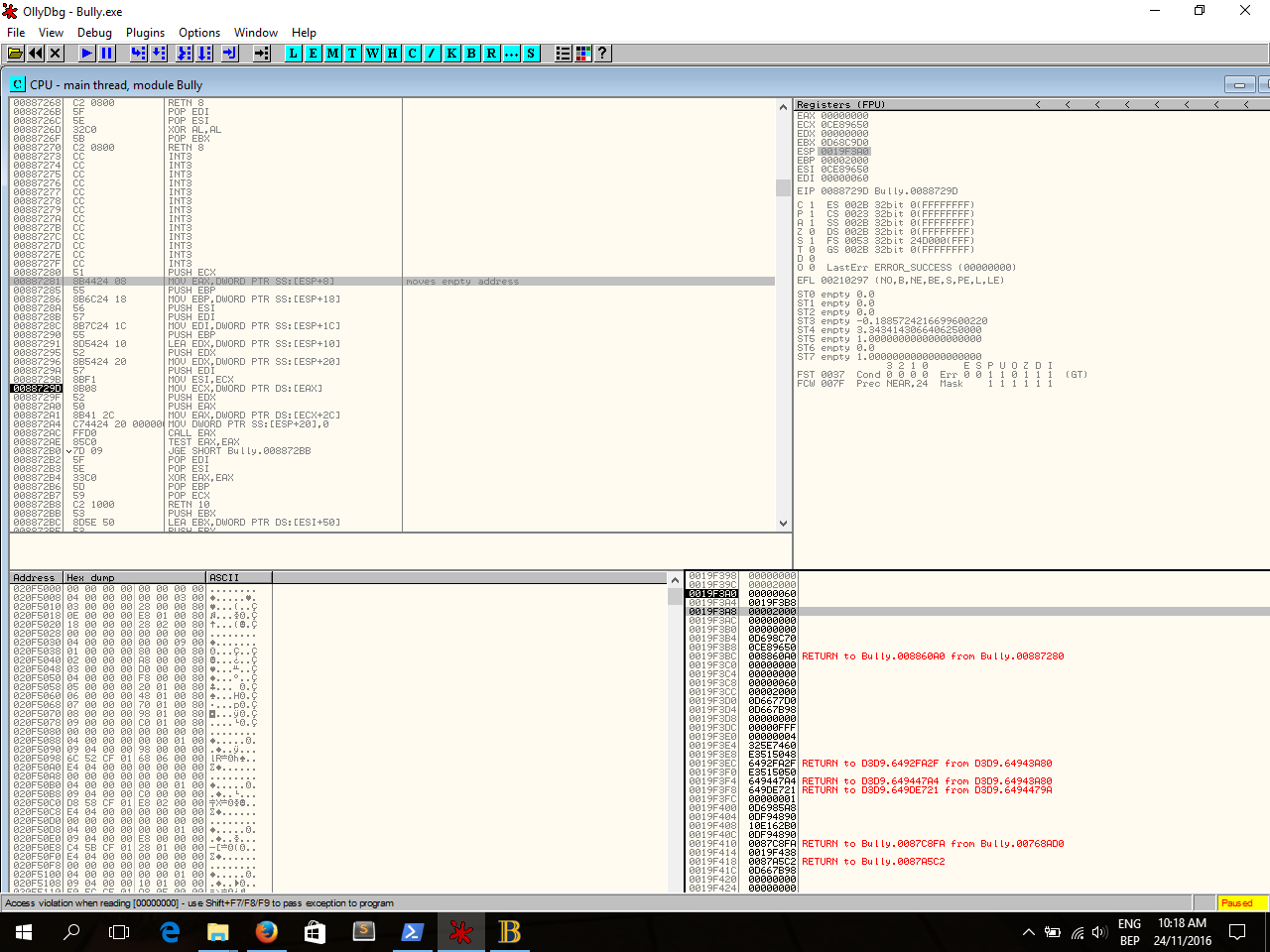 The exception is thrown at address 0088729D which has this instruction

The EAX register is apparently empty (you can see that in the image). So I checked when information is moved to that register. It happens at the address (I've selected the line and added comment "moves empty address") 00887281. It contains the following instruction:

As far I know, SS is the stack segment register and ESP extended stack pointer. The ESP register contains address 0019F3A0. With offset 8, the address is now 0019F3A8 (see selection in the right bottom box). It contains 00002000.

I'm now clueless after this point. I don't understand why the address during the call is zero and not that value. I expect that the EAX register would contain 00002000 after the instruction. However, this is not the case this time. The EAX register contains 00000000.

I believe that I'm interpreting this incorrectly. Can someone point me where my misinterpretation occurs or inform me how to check this problem more correctly?

PS: the reason for this is because I've played bully in my childhood and want to play again. Apparently, there are other users with the same problem, even after attempting the known solutions on the web. Perhaps if I find a solid solution for this, that I would be able to help others too.

Browse other questions tagged ollydbg debugging or ask your own question.

2
Addressed changed by code from a common address
2
OllyDbg Break when memory equals value
1
OllyDBG translate ASM to C
3
Getting Access Violation when patching a program
1
OllyDbg: How to set conditional breakpoint on a register value?
1
I have a problem with understanding the register %bl
2
ARM system crashes after changing stack address
1
What is happening with these exceptions in OllyDbg?
0
OllyDbg: Constant does not fit into operand