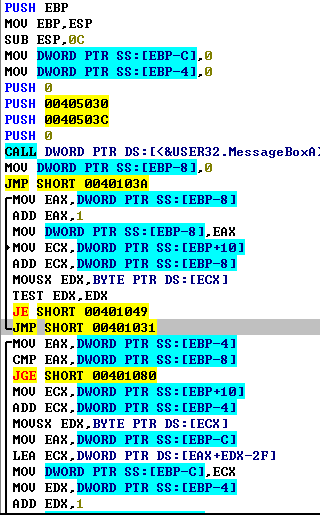 this is I got so far

anyone give me some hint to solve this question? is this represent the pointer?

Although the complete picture of your assembly cannot be reconstructed, as there is something missing at the bottom, it can be said that your C re-coding is correct in the first (and simpler) loop, but wrong in the second loop.

First loop: This is simply a strlen of the command line parameter, being stored in the local variable i.

Second loop: Calculation of k from each character of the command line (presumably, because the rest of the loop is missing), taking into account the old k value. Probably that algo is part of your crackme.

Also, your "while" comparison of the 2nd loop is wrong.

The re-compiled code as I see it could look like follows (probably correct until the last statement of the second loop, the rest remained your secret):

Not the answer you're looking for? Browse other questions tagged disassembly c disassemblers or ask your own question.

8
Converting assembly code to c
3
How do you compare C source code with the corresponding binary's assembly in IDA Pro?
7
IL for decompiler to human-readable format
3
Intel Pin memory operations tracking
3
How do I approach this CTF Debugging Program?
3
Getting to the specific offset in assembly code
2
Finding the correct input of an executable to print out the flag. IDA 7