is it possible to decrypt Enigma and RC4 encryptions? 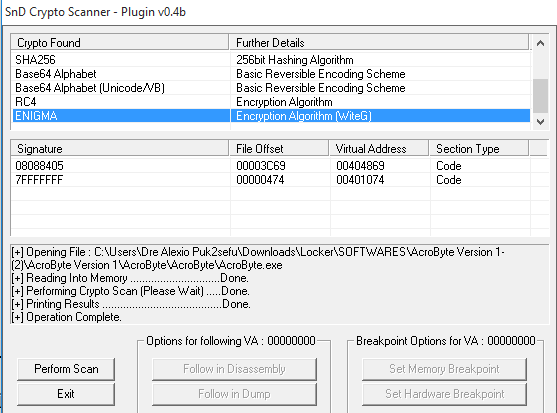 i have been working on a bug for almost a year trying to figure out how i can fix it. the app is suppose to show some message like ("Processing")to notify a user that the main function is executed, so since Delphi is easy to reverse with its strings. i have searched for encryption using Olly's SnD Crypto plugin and i have found the following

according to the plugin Enigma was used to protect two pieces in CODE section which i thought is hiding an Algorithm. RC4 is protecting most pieces of the DATA sections probably the Base64 encoded strings so dealing with strings is a none start for me because if it wasn't like that i would look for a messagebox Api or Search for strings.

i would like to Decrypt Enigma then simply follow through since the app is an email transporter i will know the function and in i will be able to see where the message should be executed.

how can i decrypt ENIGIMA thats mostly my question?

the hardest is Enigma Vitualbox which is a crypter fully undetectable by PEiD but somebody released a program to unpack it, in my case the program didnt successfully decrypt Enigma it doesnt find engma entrypoint so i used ollydbg to manually break on CreateProcessA

9
Is it possible to decrypt an SSL connection (short of bruteforcing)?
4
Having keys and binary, how do I reverse/decrypt a stream encryption?
0
.dat file how to Encryption and decryption?
4
How do Enigma, Themida and VMProtect compare to each other?
3
Help reverse decrypt function (decode -> encode)
0
Difficulty decrypting LCG string