Where do I find a cheap hardware USB sniffer

I wanto to capture and then process the USB data that is sent from a computer to a USB printer.

A comercial solution would be possible if costs less than $200.

It could also be a PCI card that is designed to capture USB signals together with an API that allows me to access the captured data.

But it would be perfect if this would be possible with a cheap USB capable hardware like any of the Arduino flavors or a Teensy and an open source library. Some of these microcontrollers support to act like USB host and client. So I suppose that they have also the capabality to just listen to the packets that go over the cable. 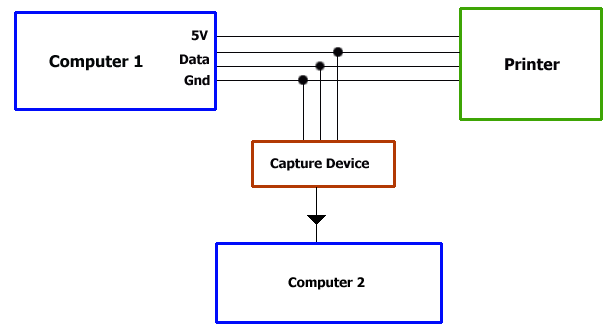 Cheapest commercial solution I found : Keelog Morphstick, 125€, which is within your budget.

It doesn't quite meet your price limitation, but since nobody else had jumped in, it is probably worth mentioning:

I've used various versions of the Teledyne LeCroy USB Protocol Analyzers, and they would meet your needs from a capture and download/analyze perspective. I've seen used versions of the older "CATC USB Chief" but they are still about 2x of your target.

From a functionality perspective, it works like your diagram above; and it is possible to have Computer 1 and Computer 2 be the same box (you end up with two USB cables going to the PC). They are able to capture HID, mass storage, and isoc data. Although make sure you also pay attention to the USB version of your device, as the older capture hardware won't support all the new protocols / speeds.

Another Hardware Packet Sniffer for USB is the ezSniffer ($79) 1. It works with Full Speed and High Speed devices and there's a Python example for analysis.

Not the answer you're looking for? Browse other questions tagged usb arduino or ask your own question.

9
Setting an USB Emulation and Fuzzing Platform?
0
RE USB-Serial device driver [Canon ES-E1 for EOS-1V]
2
Reverse engineer an HID device - recreate using arduino
1
Unknown (and unowned) USB device
1
Bypass USB key activation of a software
3
Where is the CRC16 checksum in a USB BULK IN transfer?