Ollydbg -how to call procedure in other DLL (in my case USER32.DLL)

I am trying to call the USER32.DLL function from assembly code. I launched an application (calc.exe) in Ollydbg 2.01. I chose calc.exe just because I know it loads USER32.DLL.

I see the format as:

I'm pushing the 4 values on the stack and then trying to enter the following into Olly:

I know USER32.DLL is loaded:

and I do see that messagebox procedure is in memory 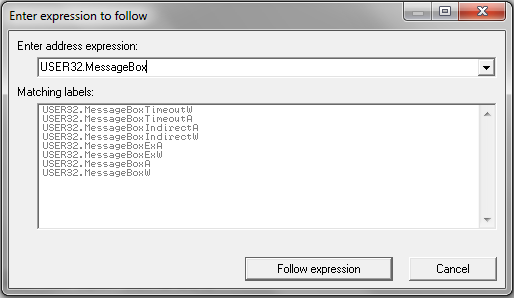 Edit: It appears I can't use the exact syntax Olly disassembles as. For example, calc.exe calls USER32.MessageBeep, but it does it indirectly by using an addressed stored at 00121420 = &USER32.MessageBeep.

To get Olly to create the same instruction I would double-click and assemble:

will appear. It would be nice if I could figure out how to type the label USER32.MessageBeep instead of hunting for it and copy/pasting the address.

It seems perhaps there is more to know before one can simply call a function in a loaded DLL. When I see people edit patches in Olly to call procedures from other modules they seem to be only calling procedures already called by the original program, whereas for USER32.DLL with MessageBoxA I have the extra challenge of it not being in memory. I got strange results when I tried to call the messagebox (it appeared in the background but wouldn't let the mouse go near it and returned to a strange address of 90909090 -possibly due to my next instruction opcodes). Perhaps this strange behavior is due to it having needed to do some setup for messageboxes which wasn't done by the program.

So perhaps an answer to my question depends on whether the procedure is somehow already loaded by the original program. In Blabbb's answer, s/he uses notepad.exe not calc.exe.

My question is perhaps getting more unfocused but perhaps a good answer to my question could explain how other modules are loaded, as well as how to make this happen in Ollydbg. I am still learning how PE applications are loaded into memory but I wonder if the answer is that to go between modules we shouldn't expect to see the relative CALL opcode E8 (see blabbb's comment below) since the programmer doesn't know what address in memory the DLL procedure will be loaded into, and in the original program they must go indirectly through an indirect CALL with opcode FF15 instead. I assume this may be related to the act of "registering a DLL function maybe?". In calc.exe it looks like MessageBoxA can't be called indirectly (unless if I edit memory somewhere with its address perhaps). But if I am paused inside a program already loaded into Olly I should be able to assemble these relative CALL instructions and invoke the procedure.

In my case with calc.exe I see some, but not all, USER32.DLL procedures in the calc .text part of memory. It appears programs call them indirectly through this list. For example here are some of the USER32

With calc.exe I can't find MessageBoxA here, but if I look for its address in the USER32.DLL module, and select names (see below) 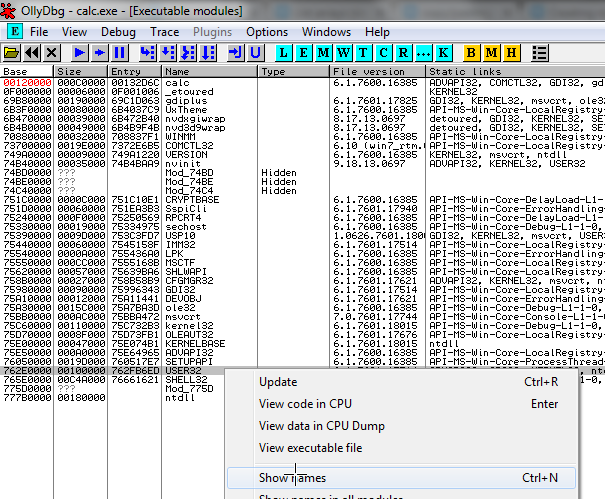 I can sort by name, and start typing the name so it finds it for me

and then assemble call 7634FD1E

Names are meaningless unless you speak the language of the interpreter binary is universal
when in doubt choose binary
use call 12345678 instead of call @lkfklsdf.skhfkhfasfhkasjfh
or learn the language 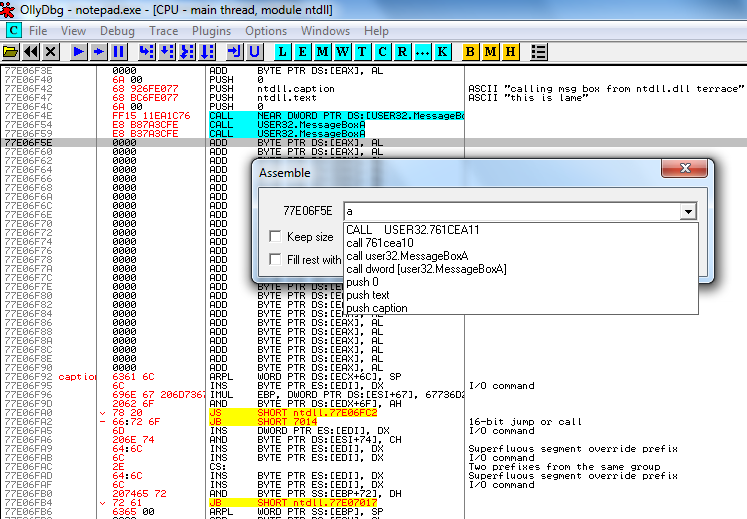 4
Cannot call function (properly) in ollydbg
3
OllyDbg: Keep comments & labels in rebased DLL
4
How to automate task in OllyDBG ? Using Ollyscript or any other tool
3
Which functions of a dll is called in OllyDBG
5
Ollydbg terminated while loading dll
7
How to Fix a memory dump of a dll - so i dynamically reverse it using olly \ ida
1
Recognizing CLib functions in Ollydbg or IDA
1
Call DLL export in OllyDBG
1
Call Stack vs Intermodular Calls in Ollydbg
0
Can't find injected DLL in OllyDbg