I'm just learning Olly/IDA and writing simple programs in C and looking at the .EXE code in Ollydbg and IDA. Below I have a simple printf Hello World program which I compile in Visual Studio 6. I can see the chain of events starting with things like kernel32.dll calls to get the Windows version number, set up the heap, get the command line, etc. I recognize the main() function and see string variables being put on the stack and can deduce the function at 00401010 is printf(), confirmed by IDA if I look at the "Names Window" for that address, but Olly doesn't explicitly tell me.

And in Olly here is the assembly for my main() function:

So those assembly instructions above is all that correspond to the C code I wrote. The rest of the .EXE is filled with lots of other code that I'd like to be able to recognized and distinguish the application from LIBC functions like printf(). I know that the compiler will generate OS dependent setup and teardown stuff (like the windows version #, heap, etc), but I figure that after a few programs and learning the PE program standard I should be able to recognize that (plus Olly takes you past that to the application code anyways).

Here, for example, is what I believe to be the top function for the LIBC printf() function, called by CALL 00401010: 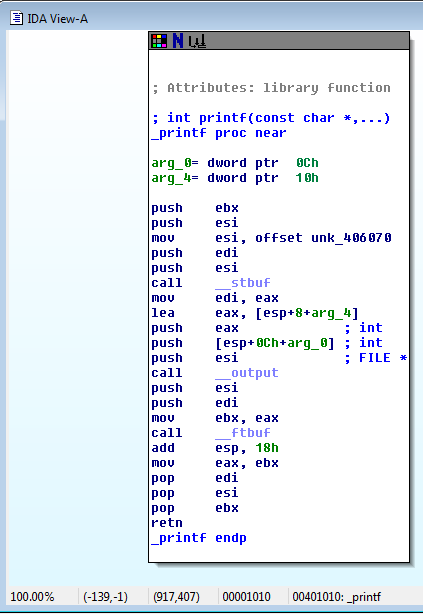 That is just the top level, if I follow it down a few levels (following CALL instructions to deeper functions) far enough I find OS functions like KERNEL32.WriteFile() which actually make the string appear in the CMD window.

My question is: how can I recognize library functions like printf() and distinguish them from the application code? It would be nice if they could appear labelled. I know there are scripts and plugins for Olly but so far (in my early learning) I haven't found how to do this.

So far I only know to take the same EXE into IDA and look at the address in the "Names Window" to see if it's the first level function of a CLIB function. But then it would take some work to label functions called by this function as also being part of the standard C library, and not the user code.

It's not a big deal looking up the address in IDA, but there's still a huge amount of code that is lower level functions that it would be nice if I could know quickly are part of CLIB and not the application code.

I'm going to guess it's something like building up an Ollydbg .UDD file or downloading a plugin or script. Sorry if it's obvious in some docs but so far I haven't found it.

All that said, I can imagine that the linker may change things such that the exact pattern may not exist in memory each time, if some optimization is done.

Instruction apply to both ollydbg 1.10 and ollydbg 2.01 unless otherwise noted

then use ctrl+g goto

the comments pane can be cycled through comments and source
right click->appearance->show bar .
click on the bar to cycle through source , comments , profile
if you have built your executable with debug info in ollydbg will show the correct source line with respect to disassembly

you can also setup the display of disasm using
ctrl+o
and check marking appropriate boxes that correspond to
Show Symbolic names , Show Module Names , etc
(explore and decide for your self what suits you)

if you compiled it with visual studio then you should have a copy of crt function in the folder (c:\progxxx\micvis\xxx\crt)

the original location for these src files for visual studio 2010 express is f:\dd ( if you dont have a partition named f use mount , if you have a drivepath f occupied by other devices like cdrom use diskmgmt.msc to change the drive letter put a removable disk use dismgmt.msc to change the drive letter to F: for that removable disk and copy paste the sources to that drive ollydbg will automatically pull it

the udl feature is not for import libraries.
import library does not contain the object data

lat but not least there are several plugins that can import the ida signatures into ollydbg one such is idasig / or godup plugin look at tuts4you.com you might find hundreds of plugins for ollydbg in ida produce -> map file and import the map file using these plugins

a screen shot of ollydbg showing the source for printf function 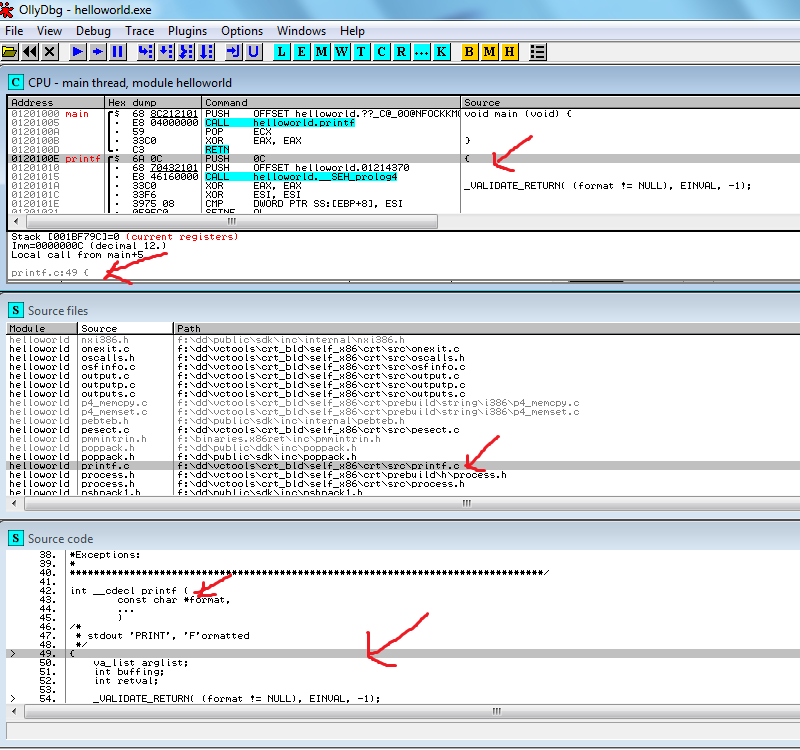 Slightly different than what I wanted (recognize LIBC/CRT in Olly) is to look at the graph in IDA. At first it seemed daunting with all the functions shown (see frightening picture below, my main() is the black box labelled '_main'). Note my program is a single call to printf(). 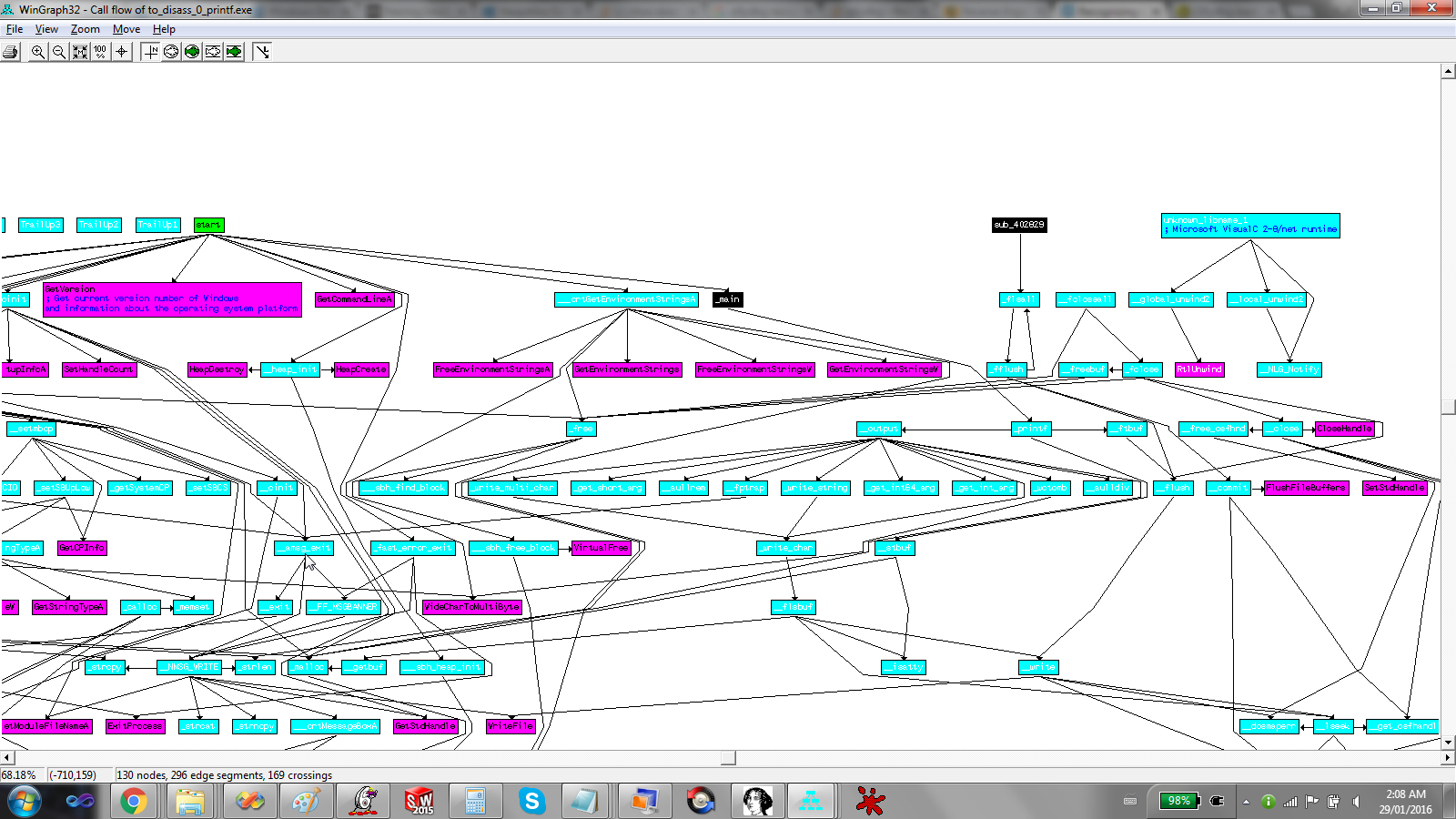 button "display graph of xrefs specified by user" and turning on the checkbox "From Library Functions" under "Ignore" then it draws a much simpler tree: 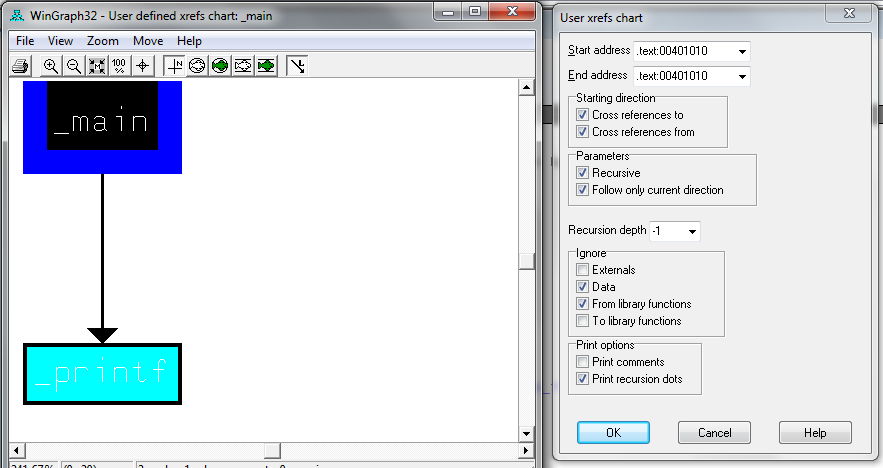 So I can see now how to easily distinguish application code from the C lib and startup functions, at least in IDA.

For Ollydbg, Blabb's answer shows how to do it with PDB files, now I want to try to do it without debug or a .PDB file.

Not the answer you're looking for? Browse other questions tagged ida ollydbg c libc or ask your own question.

0
What to do when IDA does not recognize return value?
0
Why ida use redundant registers?
1
Ollydbg: Function name list like in IDA
2
Why are there so much more functions in ida than my source code?
1
Extracting instruction and operand information in IDA Python
2
Finding the correct input of an executable to print out the flag. IDA 7
2
OllyDBG saved executable crashes
2
IDA plugin to show xrefs to virtual functions?
1
Ida Pro doesn't recognize known function