I start by saying that I'm completely new to the topic of reversing although I have many years of experience with programming in general.

I've some problems with automatic recognition of library functions of a DOS executable compiled with Borland C++ 3.1.

Starting from this I was relying blindly on these library function in the rest of the code until I realized that there was something wrong, this is, for example what I see in for strcpy: 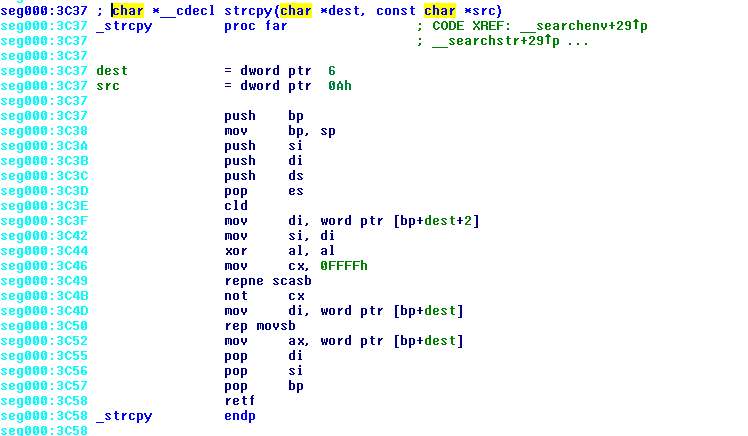 Which doesn't make sense to me since src is not used at all. Then repne scasb should scan for the length of the string but the last value placed in di is [bp+dest+2] like if both const char* were not dd but dw (so just the offset, without any specified segment, and ds is used implicitly).

Since this was getting me crazy I checked the original implementation of the function by opening CC.LIB of BC++3.1 with IDA Pro directly and implementation is different indeed: 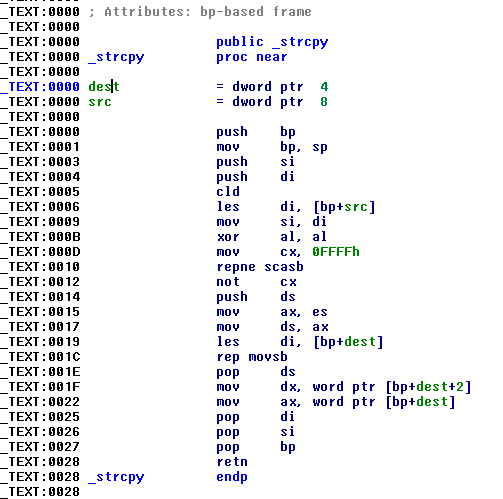 So where's the problem here?

How can I alter the function as I want? I tried modifying directly stack variables (Ctrl+K) but then offsets become faulty (eg [bp+8] marked as red).

I ask sorry if I'm making some trivial wrong assumption that I'm not realizing.

Back in the 16 bit world, programs could either

You see how the first function makes sure that es = ds (push ds; pop es) but doesn't mess with segments otherwise. This would make it use 16 bit pointers. The retf at the end suggests it uses the far code convention.

The second function uses LES di, [bp+src], which loads es and di at the same time. This means it uses far data pointers on the stack, the retn at the end means it uses the near code model.

What happened is that, in your disassembled program, IDA saw the retf, deducted far code, and probably assumed far data as well - which is wrong. If data was indeed far, you'd have 4 bytes for src, and another 4 bytes for dst, and this is what ida is showing on your stack. But in fact, the pointers have just 2 bytes each, so dest is at offset 6, but src is at offset 8, not 0x0a (10). Which is why accessing src is shown as dest+2, and the (wrong) offset 0x0a, which IDA falsely assumes to be src, isn't used at all.

Shown as a picture:

To fix this, open the function prototype dialog, and change the pointer definitions to char near *.

Not the answer you're looking for? Browse other questions tagged ida dos flirt-signatures or ask your own question.