I'm trying to have a whole picture of all the possible addressing modes of X86 instructions. Starting from this I studied the Intel IA-32 reference and multiple secondary references found online.

I'd like to understand them correctly, so here's my doubts: 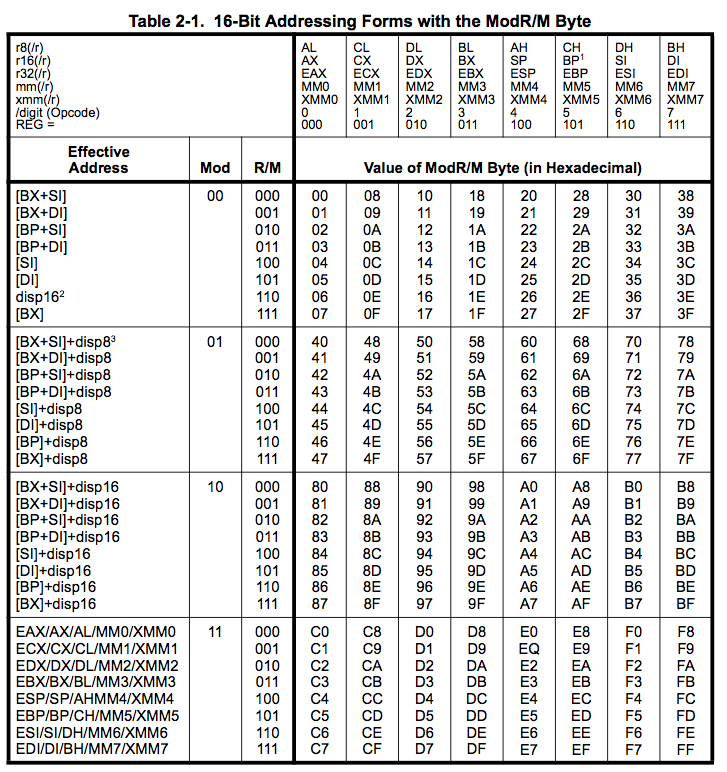 And now the 32-bit addressing modes 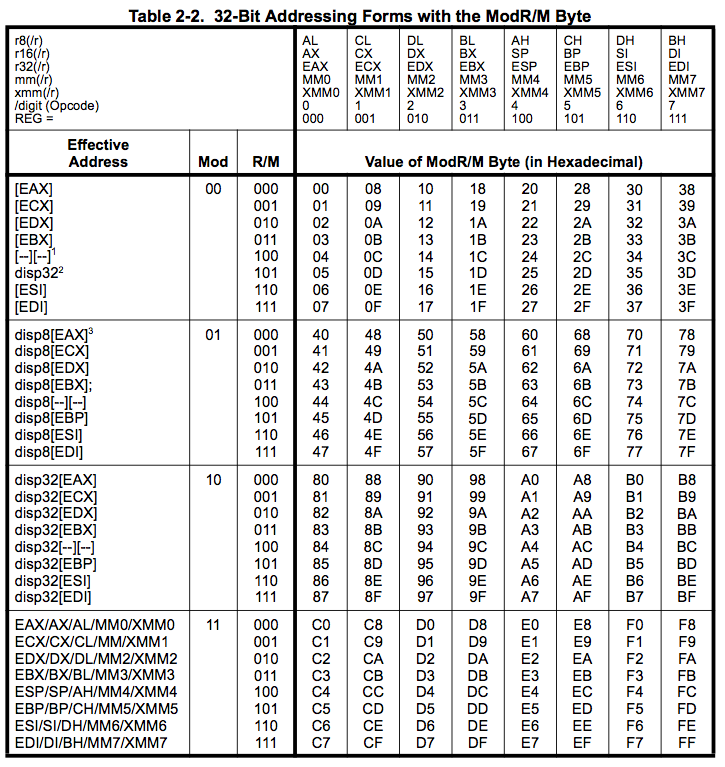 Here everything is enough clear, I was just wondering, as for 16 bits if displacement in 32 bits are signed or unsigned? SIB and displacement can be combined easily if I understand it correctly, eg [EAX + EBX*2 + 10] will generate a mod == 01 with specific SIB byte and additional single byte for signed displacement. Are these values considered absolute in a flat memory space or segments must be considered here too?

Don't misunderstand me, writing your own assembler can be an interesting and educational experience. But the gory details aren't first thing you should learn to understand the concept of a processor and its assembly language.

That out of the way:

Yes, all addresses are relative to the chosen segment - ds in most cases, ss if you use bp, and the given register if you use an explicit override prefix. Note there wasn't a way to index relative to sp in 16 bit mode, and bp, if used at all, was always the first register in R1+R2 combinations, forcing ss to be used with bp. In 32 bit mode, more combinations are possible, and [ebp+ebx] uses ss, while [ebx+ebp] uses ds. (However, 32 bit mode also means protected mode, and in all but the most pathological cases, operating systems use the same selector values for ss and ds, and cs as well. See below).

Prefixes 66h and 67h - ask someone else. Although i've been reading and writing assembler code for more than 20 years, i never had reason to learn the relation between hex bytes and processor instructions. See above. Well, i guess there are two exceptions: 90h is NOP, and cch is INT3. And byte sequences like PQRST, 50h 51h 52h 53h 54h are push-register instructions, which makes them useful for locating procedure starts.

In 32 bit modes, the displacements are just as "signed" or "unsigned" as in 16 bit modes. Just treat them as 32 bit values that get added, which might result in an overflow that's thrown away.

And of course, these values are considered relative to the "segment"s as well. Just that 32 bit implies protected mode, which means the segments are called selectors, have different semantics, and get generally ignored by most application programmers.

A word to segments, why they mattered, and don't (normally) matter any more:

At first, when the 8086 was introduced, it was meant to replace the older 8080 processor (and the Z80, which was from a different company, compatible to the 8080, but better and more successful). The 8080 had 64 KB at a maximum altogether, so programmers had to squeeze everything - code, data, stack - into those 64 KB, and most of the time, a part of these 64 KB was used by hardware, so you had even less.

When the 8086, and the segment registers, were designed, someone at intel probably thought "We're giving people much more space - 64 kb code AND 64 kb data AND 64 kb stack, so programs can be much larger; we can multitask between several programs, the operating system will manage the segment registers to assign space to each program, and every program can be so much bigger than today".

But in fact, programs got much larger quickly, so the idea "segment registers should concern the OS only" wasn't ever used. Instead, programs had to juggle segments on their own, which was a major PITA for everybody from compiler builders to application programmers, and everybody had to learn - and know - about them to get anything done.

When 32 bit processors started, with 4 GB addressable in a linear fashion, segments suddenly became big enough that application programmers didn't have to care about them anymore. These days, juggling segments and assigning them to memory maps is strictly the task of the operating system, and due to protected mode, programs couldn't change them even if they wanted. So, what most operating systems do is provide one single flat block of memory to the program, and have cs, ds, es and ss map to that block identically. Your application just sees 4 GB of addressable memory (not all of that needs to be truly mapped to physical memory however), and it doesn't matter to the application anymore which segment registers it uses - [DS:1234] is the same as [ES:1234] is the same as [SS:1234] is the same as [CS:1234].

The exception to this is the new registers FS and GS, for example, Windows uses FS for Structured Exception Handling, and Linux uses GS for Thread local storage. These segments are NOT mapped to the standard 4 GB block, but an application won't notice, since neither of these registers is ever used without an explicit prefix. (Note ES can not be used in the same way, since instructions like stos[bwd] and movs[bwd] use ES:EDI by default).

Not the answer you're looking for? Browse other questions tagged assembly x86 or ask your own question.