I am trying to learn to get around Ollydbg, using Lena's tutorial. The latter is based on v.1.10 but I'm using 2.01. So far that went ok.

However, I now find myself in a situation where my result differs a lot from the tutorial (no 4).

In my case though, as soon as I click pause, Olly leaves the main application module, landing on RETN in a subroutine of USER32.GetMessageA

Now I can't get back to the application at all, it's blocked. I have to continue the debugger in order to be able to get back to it again but this way I get no info about the messagebox.

Any tips how to proceed in order to get the expected result? I guess in this specific example I could just search for all messagebox calls in the code but that's hardly a good way, especially with large apps.

A related question, is there a possibility to "look back" on what happened, as in which code was called up to a certain moment?

Apologies if any of this doesn't make much sense.

alt + k to view or look back

no you cant close a paused MessageBox not in v 1.10 or not in v 2.01
it is simply not possible period
you must be misreading or misunderstanding the tutorial 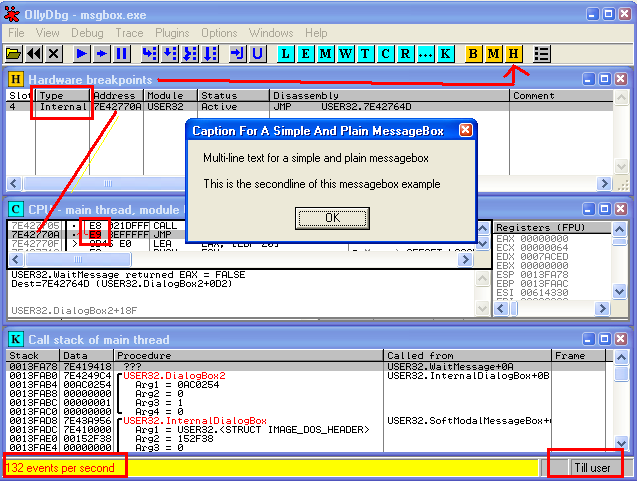 Have you tried in 1.10? I have and have no issue. Make sure you leave the dialog opened, and instead of hitting Alt-F9 I found the option in the menu.

Not the answer you're looking for? Browse other questions tagged disassembly or ask your own question.

5
Call to variable address
11
Why is JMP used with CALL?
1
Understanding packet byte structures with OllyDbg
6
Call to an imported function in a PE file: Why is destination prepended with ds (call ds:func_name)?
1
Find messagebox string with ollydbg
0
Intel syntax - Meaning of jmp/call instruction with $+5 operand
2
IDA: call a function with different arguments
1
Trace back function call