Does Windows 7 Pro use ASLR for win32 executable?

I unpacked a UPX packed PE binary. Both the packed and unpacked binary have fixed image base of 0x400000 (Checked by various PE tools).

Here is my real question. The unpacked executable have some address reference invalid. They are all using the standard win32 base 0x400000.

For example, I have the following instructions in my unpacked program, the reference to the 407018 is invalid.

Why is this happening in the first place?

Changing image bases to a different random address each time an image is loaded is called Address Space Layout Randomization (In short, ASLR). Most modern OSes employ ASLR on user mode processes (Some OSes do that for kernel mode code as well, at least partially) where this is possible.

The major advantage of ASLR is that it increases the difficulty if exploiting memory corruption based exploits (often requires a information leak type of bug to mitigate), and therefore encouraged by the security community.

In order to be ASLRed, an image must be relocatable. That is, it is required to properly function regardless of where in memory it is located. This tends to be complicated because certain instructions (in certain architecture) are position based. For example, on the x86 architecture the CALL instructions can be either relative or absolute, making it impossible to change the addresses at which the image is loaded without risking crashes.

An image can either make sure it only uses relative instructions (which might be difficult at times) or provide a relation table as part of the image file. A relation table explicitly lists all absolute addresses used in the image for the loader to fix in case the image is relocated.

How to avoid ASLR?

Obviously, disabling ASLR is not encouraged because of the protection it provides. On 64bit windows user mode ASLR is mandatory, so you simply cannot disable it. However, on 32bit windows, you're allowed to and can disable it by disabling the relevant PE flag, by un-checking the marked checkbox in the following image: 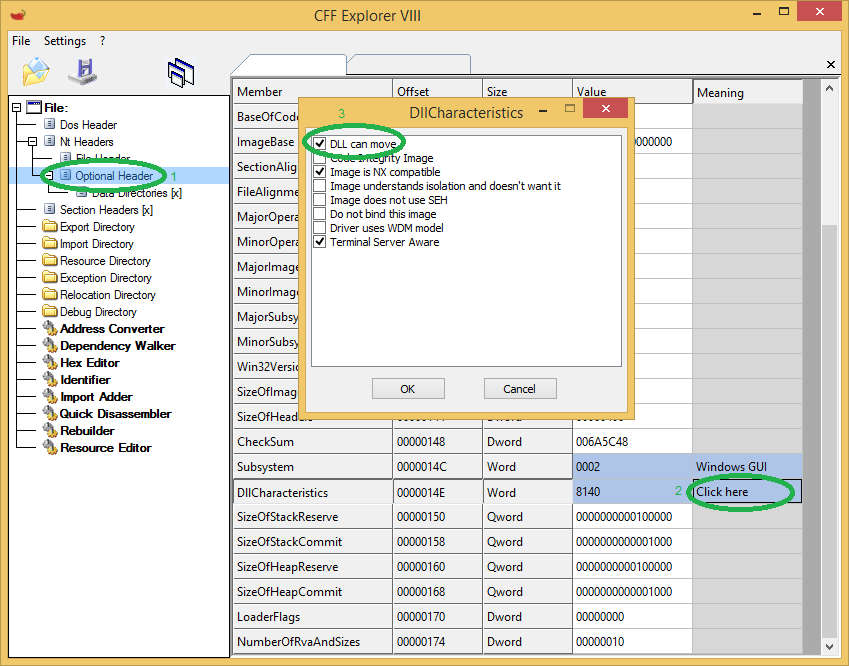 Not the answer you're looking for? Browse other questions tagged windows unpacking binary or ask your own question.

2
Unpacking a program which seems to be not packed?
2
Generate Mach-O binary from running process
3
Fixing import table of unpacked DLL with ImpREC : ImpRec throws “invalid OEP!” error
1
Unpacking ASpack Malware
8
Automated Static Unpacking Binaries
3
How can I modify binary image resource data?
1
How does ASLR in Windows work?
1
Executable code in the same location differs in memory and on disk
3
Reconstructing a PE from unpacked memory in IDA